On February 18 NEP Australia will open the Andrews Hub, an all-IP production facility that will be connected to more than 29 stadiums across the continent. Comprising a hub in Sydney, opening Feb. 18, and one in Melbourne, opening in March, the Andrews Hub lays the foundation for a new era of sports production in Australia. And, while final construction and testing has been taking place, the NEP Australia team managed to complete an on-air test from a temporary facility where the production team was 900 km (more than 500 miles) from the venue.

“There are seven control rooms across Sydney and Melbourne,” notes Marc Segar, director, technology, NEP Australia. “However, we consider this one broadcast center in two physical locations because we can share just about any resource.” 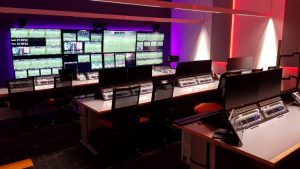 One of the seven control rooms in the Andrews Hub

The temporary hub, which was set up at the Sydney facility, housed the production team — director, technical director, audio director, graphics and replay operators — for a Hyundai-A League soccer match taking place about 560 miles away in Brisbane. During the broadcast, live uncompressed HD signals from 10 Sony HDC-4300 4K/HD cameras, including high-frame-rate units, were sent from the venue to Sydney via NEP’s new countrywide Distributed Production Network (DPN), with a fully redundant network at 50 Gbps. The production relied on ST 2110 and IP to deliver a live event to air in uncompressed HD, an industry first.

“The main driver from our client Fox Sports’ perspective was, the broadcast quality must be the same,” says Segar. “With no compression, we minimize latency and have no impact to the quality of the pictures.”

He adds that the biggest single challenge was getting the production team accustomed to being separated from the venue and also overcoming some of their perceptions about what it would be like to work remotely.

“From a technology perspective, all the issues were resolved early on in our R&D phase,” says Segar. “We are now five projects into the go-live phase, and the general comfort level and environment in the Andrews Hubs are excellent and very quiet.”

“That will allow them to connect to either hub,” says Segar. “We will remain a mixed-use–facilities company as we balance projects at IP networked venues with those that are not connected, projects that don’t make sense to cover via the hubs and, of course, allow other broadcasters to work in the traditional mode until such time as they are ready to move into the Andrews Hub.”

Uncompressed SMPTE ST 2110 will play a big role in all of the IP facilities, a key to reducing latency and delays. The only times compression will be used will be when a project originates from one of seven venues where bandwidth is limited to 10 Gbps.

“For those venues, we use VC 2, which is an ultra-low-latency compression technology, and compression is used only for contribution,” Segar explains. “Generally, we will employ 4:1 compression at these regional venues. However, because the environment is entirely virtualized IP, we can switch compression or even the ratio by the channel.”

Fox Sports Australia will be among the top clients to be served out of the new facilities, and Steve Edwards, head of technology, Fox Sports Australia, says NEP has done a great job not only in building these world-class, state-of-the-art, all-IP facilities but also in working with the Fox Sports production and technical teams to enable the next generation of sports-broadcast production: “Their willingness to embrace the newest IP technologies and emerging IP broadcast standards has been the key to success so far.”

But the success of the facility will ultimately be about people, not technology.

Says Segar: “Staff that have worked in the hubs so far like the size and lack of noise in the control room and [the sense of] being part of something truly groundbreaking.”