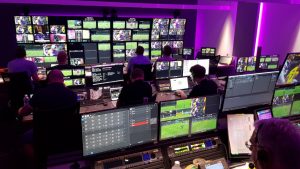 “Perth and Sydney are 4,000 kilometres apart so it’s a pretty significant milestone, especially as we are using SMPTE ST-2110 [for the IP transport of the video and audio signals],” says Mac Segar, NEP Australia, director of technical services.

The Fox Sports Australia production team for a football match in Perth produced the match from a control room that was in Sydney, 4,000 kilometres away, this past weekend.

The Andrews Production Hub currently consists of four production control rooms in Sydney that officially went online during the middle of February. In May three additional control rooms, located in Melbourne, will also come on line.

The Andrews Hub project began in August, 2016, when Fox Sports Australia put out an RFP for centralised production facilities. NEP won the contract in early 2017 and from that point on began a sprint to not only construct the facilities but also sort out equipment and technical decisions. The most daunting decision was a commitment to the SMPTE ST-2110 standard because the standard itself was not ratified until last fall. But key manufacturers, like Lawo, Sony, Ross, EVS, and others, worked hard with the NEP team to begin testing of 2110 workflows last May.

“The main driver for the RFP is that Australia is a massive country with massive distances between cities and nothing in between,” says Segar. “And here in Australia we look after the freelance production crew as well as our own crew so the Hubs create significant travel and logistical savings.”

For the March 10 match a 40-foot all-IP production truck was rolled up outside of the stadium (the truck can do a 16-camera show on its own) with camera operators and an audio A2 on site along with the announcers. Uncompressed video and audio signals were sent from Perth to Sydney via a 50 Gbps Telstra fiber so that the production team (comprised of a producer, director, TD, EVS replay operators, graphics operators, camera shaders, and the A1 audio mixer) at the Andrews Hub could cut the show.

Not all productions will make use of uncompressed signal transport. Seven venues only have 10 Gbps connectivity so VC2 compression will be required.

“It’s an ultra-low-latency compression technology, and compression is used only for contribution,” Segar explains. “Generally, we will employ 4:1 compression at these regional venues. However, because the environment is entirely virtualised IP, we can switch compression or even the ratio by the channel.”

“We have redundancy across the two sites as they are connected together and share all of the resources,” says Segar.

“That will allow them to connect to either hub,” says Segar. “We will remain a mixed-use-facilities company as we balance projects at IP networked venues with those that are not connected, projects that don’t make sense to cover via the hubs and, of course, allow other broadcasters to work in the traditional mode until such time as they are ready to move into the Andrews Hub.”

The move to a centralized control room will be a big shift for crew members who are typically used to being road warriors. But the benefits, not the least of which are the ability to sleep in one’s own bed, see the family, and leave the stress of travel behind, holds many potential benefits that extend beyond simply cost savings. Crew members will also be able to work on new sports and things like staff training will also become much easier.

“For example, the team doing the Perth game was able to do a job on Sunday which they otherwise could not have done because they would have been lost to travel,” says Segar. “It’s early days but I see a much happier and relaxed production team as the facility is more like something a traditional broadcaster would use. We can make it a comfortable environment and make better TV.”