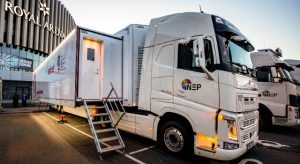 NEP Sweden has selected XT4K ChannelMAX servers from EVS to drive the ingest, playout, slow motion replay and highlights production within its new UHD-1 OB. UHD-1 is NEP’s largest OB in Europe and features an integrated workflow of the latest UHD-4K, 1080p and HDR technologies. Later this summer, the XT4K servers will be upgraded to new XT-VIA servers as they start shipping.

Designed to cover the highest-profile events across northern Europe, UHD-1 was deployed for the first time to produce live coverage of the 2018 IIHF Ice Hockey World Championship from the Royal Arena in Copenhagen where Sweden won the gold medal. NEP Sweden provided the tournament’s host broadcasting services for Host Broadcast Services (HBS), and for which it used 30 cameras, five of which were triple-speed super motion, and all recording in 1080p50 Full HD.

The XT4K ChannelMAX servers installed within UHD-1 ingested all the live camera feeds and were used to create engaging replays and highlights for ice hockey fans around the world. UHD-1 also featured XFile3 systems from EVS, which were used to efficiently manage all file flow requirements of the live production.

All the games, which were produced in 1080p50, were ingested and archived with the XT4K and XFile3 systems using AVC-Intra. XFile3 was also used to instantly export clips and highlights created by LSM operators during the live to the International Ice Hockey Federation (IIHF) and the host broadcaster for online and social media publication.

“NEP is a long-time user of EVS servers, as we know we can rely on the quality of the technology,” said Jens Envall, technical director at NEP Sweden. “Throughout the tournament the 1080p50 images ingested by the XT4K servers have been truly outstanding. And the level of channel flexibility that the EVS server offers is a huge benefit, as it lets us deploy our cameras, including super motion units, however we need to.”

Following the event, NEP Sweden’s UHD-1 will also become one of the first OBs to benefit from the installation of EVS’ next-generation server – XT-VIA. The new server features up to six channels of UHD-4K and ChannelMAX allows 12-plus channels of HD and Full-HD, so service providers like NEP can operate more efficiently, producing programming in whatever format and resolution is required by broadcasters and rights holders.

“We know that EVS’ technology and support always deliver to the highest standards,” said NEP Sweden’s managing director Rikard Troell Norén. “So, adopting a path to transition to the new XT-VIA server is a natural decision, because it fully supports HD, Full HD and UHD resolutions and operates in a higher dynamic range as needed. At the same time, the servers’ native SMPTE 2110 support and flexibility of operation in SDI or IP infrastructures implies we can deploy them in whatever configuration our customers require, in any kind of production workflow.”