With a massive 2,000-metre-long course at a venue that had never hosted a live TV event, last month’s FISA World Rowing Championships proved to be one of NEP’s more unusual live productions. Working with SANCA (Suncoast Aquatic Nature Center) World Rowing Productions and FISA (Fédération Internationale des Sociétés d’Aviron), NEP was on hand at Nathan Benderson Park in Sarasota, Florida, to produce more than 12 hours of live coverage from the Semifinals and Finals (September 28-October 1) on the Olympic Channel: Home of Team USA and NBCSN. 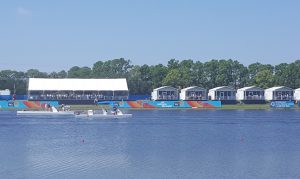 “We were pleased with how the production turned out and especially pleased to hear the client’s positive reaction,” says Stephanie Boccabella, Senior Account Manager at NEP. “They said it was one of the best TV host-broadcast productions for an international televised rowing event. We’re very proud to have been a part of it.”

NEP rolled out its TS2 (A and B) mobile unit and a crew of 37 (along with 21 members of the World Rowing Crew) for the production. The 19-camera complement included 11 hard cams (including a super-slo-mo), three handhelds, one handheld in a studio configuration, two Cineflex stabilised cameras (provided by Aerial Video Systems), and a DJI Inspire II drone (provided by Measure). 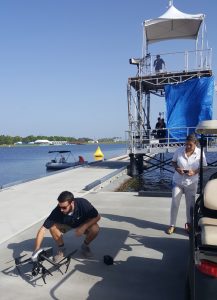 NEP enlisted Measure to provide a drone for the rowing coverage

Instead of using a helicopter and/or wire-based aerial camera system, as is customary with rowing coverage, NEP enlisted Measure to deploy a drone camera system. The drone’s ability to change elevation from a top overview to a water-level shot created dramatic views of the outdoor venue, while also serving as a more cost-effective solution than a helicopter or wire-based system. In addition, the ability to create off-course shots, such as venue flyovers and beauty shots, provided valuable bumpers and overall views of the entire facility, lending perspective on the sheer size of the event.

Measure’s DJI Inspire II system boasted a 20- to 40-minute battery life, allowing it to cover two races per battery cycle followed by a quick one-minute battery change. The drone-operations area was located at the 1,500-meter mark on the floating road, enabling Measure to land and swap out batteries without missing any action on the water.

The 2,000-metre course required primary cameras to be located on a wave attenuator or single-lane floating road that stretched approximately 1,500 meters. In addition to four camera towers built on the road, two tracking vehicles and a commentary vehicle operated on the road as well.

The cameras located at the Start Aligner position and the Finish line required a lens modification and Vinten Vector 950 active head provided by Swiss Timing. The data from the lens and head was transported via the tracker-data port on the Sony HDC-2500 camera to the CCU in TS2 and then connected to the Swiss Timing computers, allowing virtual graphics to be inserted into the coverage.

AVS designs CineFlex camera system for follow vehicles
To follow the action on the water, two tracking-camera vehicles needed to operate on the floating road, which had a weight limitation of 3,200 lb. (eliminating use of standard tracking vehicles).

NEP partnered with AVS (Aerial Video Systems) to design a Cineflex stabilised camera system/vehicle that met both the needs of the coverage and the load limitations. The first vehicle was an ATV deployed to accommodate the small jib, jib operator, camera operator, and driver along with RF gear. The other vehicle was a Smart Car with a roof-mounted Cineflex and the operator and driver inside. The tracking cameras needed to follow the race from start to finish and be able to return to the start for the next race in a limited time.

To mount two hard cameras to catamarans, NEP used orbiter camera mounts fastened to the boats, along with generators and mounted RF gear. This required RF communications with the operator and catamaran pilot.

The Championships marked the first-ever live TV production at Nathan Benderson Park, which meant that all facilities were new. Leading up to the event, NEP Project Manager David Greany consulted with the venue regarding installation of fibre and access panels throughout the facility.

Thanks to NEP’s involvement in the fibre-design process, not only were flat- or standard-polish connectors installed, but such items as APCs (angle-polish connectors) were also installed in key areas to facilitate the RF antenna systems needed. This significantly reduced setup time and virtually eliminated the need to home-run long fibre cores from the mobile unit. Climate-controlled fibre enclosures were installed, along with power at all key camera positions and an ST-connection enclosure at the compound.

A wide beauty-shot camera was located on the opposite side of the water, requiring SMPTE fibre to be run across the lake (approximately 1,000 ft. from the mobile unit) and sunk to prevent its being caught by the boats.

Miking up the rowing action
In terms of audio, at the start, NEP deployed Sennheiser 416 short-shotgun microphones in Zeppelin windscreens, mounted with Bogen arms to the pier at each starting lane. The handheld camera on the pier was outfitted with a Sennheiser MKH 70 shotgun; the two hard cameras featured Sennheiser MKH-816 mics.

In the Finish and Award area, each handheld bore a Sennheiser 816, and the grandstands were covered with stereo shotgun mics and a Sennheiser 816 on the wide beauty camera.