As the sunset on the Super Bowl in the U.S. it was rising on what is without a doubt the Super Bowl of skiing: The World Alpine Ski Championships are underway in St. Moritz Switzerland and will run until 19 February. 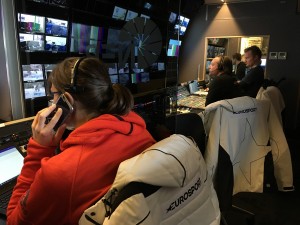 NEP Netherlands and Belgium are on hand at the World Ski Championships in support of Eurosport.

NEP Netherlands and NEP Belgium are on the scene in support of Eurosport with Unit 15 and Pim Koster, NEP Netherlands Broadcast Services, project manager, describes a production area in the truck that is a virtual United Nations of production.

Unit 15 is based around a Sony MVS-7000 vision mixer and a Miranda 8280 288×450 hybrid router. It has 27 Sony PVM2540 OLED monitors with Axon multiviewers and up to six EVS XT3 servers. Audio is supported by a Lawo MC66 with 56 faders and a Lawo Nova HD Core 8K audio mixer. A Riedel Artist 128 Intercom keeps communications flowing.

The languages are Italian, English, German, French, Dutch and Swedish. There is also one studio on set which is used for international, French, and German highlight shows.