Following its investment in several XT4Ks earlier this year for its new 4K production trucks, NEP Switzerland is again deploying the live production servers – alongside several other EVS solutions. This technology drives end-to-end UHD-4K production inside a new broadcast centre built in Zurich by NEP for the recently-launched Swiss MySports channels, which are owned by UPC Switzerland, the country’s largest cable television operator and subsidiary of Liberty Global. 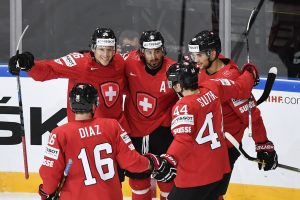 NEP also provides MySports with operational services for the new broadcast centre, which includes two studios, three control rooms (one dedicated to the production of highlights from the games being broadcast), post-production and playout facilities. The workflow that has been integrated needed to be as fast and flexible as possible, because of the range of content being produced and since the Swiss channel is broadcast in three languages – German, French and Italian.

MySports broadcasts live games of the National, Swiss and MySports ice hockey leagues as well as the men’s national team, the Swedish Hockey League and the Russian Kontinental League. The new sports channel also broadcasts live action from the German Bundesliga, the Portuguese Primeira Liga, the Swiss Handball League, Formula E auto racing and beach volleyball. Alongside the live games, MySports also offers in-house half-time and post-game shows, magazine programs and highlights packages. Overall the channel will broadcast over 20 events – the production for two of which will be in UHD-4K.

To achieve this, NEP Switzerland has chosen the XT4K and XS4K servers to act as the ingest and production backbone of the broadcast centre’s workflow. These enable the production crew to record multiple feeds at once – in UHD-4K, HD or Full HD 1080p – and will be connected, alongside other workflow components through a 10 Gigabit IP network infrastructure.

The broadcast centre’s overall workflow connectivity is currently based on 3G-SDI, but with the XT4K and XS4K’s built-in flexibility, NEP can update the EVS servers to IP I/O with the upcoming native support of SMPTE 2110 before the end of 2017.

In the control rooms, LSM operators use the LSM remote control panel to produce clips and create engaging slow-motion replays and highlights, which can be played out during studio analysis within half-time or post-game shows. Operators are also able to take advantage of content playlist creation and management using the LSM Connect interface.

All ingested content is available for browsing in the IPDirector database, while advanced editing is done using several Adobe Premiere Pro CC workstations with EVS’ IPLink plug-in for Adobe. With this, editors can access all content managed by IPDirector, including live growing files. The plug-in enables fast turnaround editing with extensive metadata search and its Exporter panel simplifies export to NEP’s Mediabank archive and to the EVS servers for use in the studio, online distribution and transmission.

ENG material can also be ingested into the system using the EVS Ingest Funnel Lite software application, where it can be managed by IPDirector. Ingest Funnel allows for fast ingest of content regardless of file format, codec or associated metadata.