NEP UK asks: Why are there so few women in outside broadcasting? 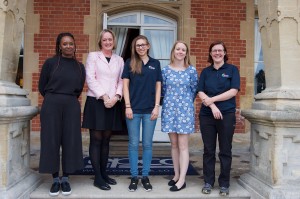 Broadcasting, particularly OBs, has long been a male dominated industry. While women are now widespread in production roles, they are still a relative rarity in technical positions. Given that there is a shortage of applicants coming in to broadcast engineering, NEP UK feels the gender imbalance has to be addressed, partly because being more female friendly should help increase the overall numbers wanting to work in OBs.

At its recent Student Open Day near its base in Bracknell, NEP UK hosted a panel of women to discuss the barriers to more women entering the industry and, in particular, to help encourage female students in the audience to see the opportunities there are.

At least a third of the students from Southampton Solent University, Ravensbourne, Farnborough College of Technology, West Thames College, and a local sixth form college in the audience were female, “but there is a very small number of female students coming into the industry, which is a really serious problem, certainly on the technical side. We need to have a better balance,” said the session’s moderator, Sean Lancastle, an independent education and training consultant specialising in broadcast technology.

When the BBC’s editor of Ceremonial Events, Claire Popplewell, worked in sport in the 1990s, any 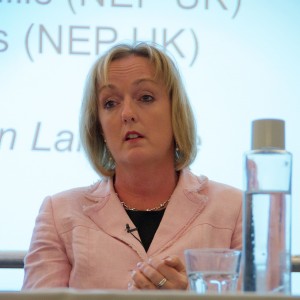 When Claire Popplewell worked in sport in the 1990s, female directors or producers had “to be twice as good as the blokes” – it has improved since

female directors or producers “at that time did have to be twice as good as the blokes. They had a really hard time of it. Now, it is a much, much better place. I still work with sport, it’s a level playing field. It is no longer as misogynistic or as old fashioned.”

Now, her production department “is predominately female. It is quite a shift from when I joined, when it was predominately male. It’s almost gone too much the other way. It’s too female driven. We actually want the balance. If there are too many women it’s not a great thing either. You really do want a 50:50 split to get the dynamics right,” she said.

“Because there are not many females in the industry, you can get the idea that they don’t want females,” but that’s not the case said Katie-Jayne Mills, a trainee vision engineer who has been with NEP UK for just over a year. She doesn’t want women to hold back from applying for jobs because of self-doubt, and reassured the students that if someone is enthusiastic enough and eager to learn, they will get the breaks whether they are male or female.

NEP sound guarantee, Pam Barnes, agreed. “There is that fear that there aren’t many of us female engineers out there.” When she started, she was the only female in the sound department (and still is), with only Mills and one other in the vision department. When she worked on golf for the BBC, there were two female engineers involved, “and it was the first time I’d seen a female engineer in the truck,” and realised it was possible.

Getting that first break

Mills only really knew there were opportunities in the broadcast industry because of family connections; it was not something that was mentioned as a possibility at school. Her father is a broadcast engineer, and she had spent a lot of her childhood watching what he did, which persuaded her to study outside broadcasting at Southampton.

Popplewell started as a secretary on work experience at the BBC, and after temping became a PA, and was later asked to direct (turning it down three times). “They couldn’t afford a director, and could get me free of charge,” she said. After becoming a live OB director, she moved into producing. 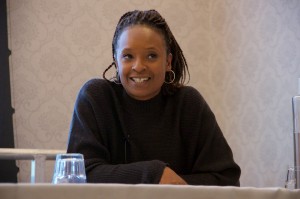 Sandra Smith, director of production at Initial (part of Endemol Shine), looks after such shows as Big Brother, doing planning and budgeting. She too got into the industry (25 years ago) because of her secretarial skills, although after a couple of years she was able to move where she wanted to. Having studied business Smith got her first job by accident. She applied to be a trainee PA for a production company, thinking it meant personal assistant, only realising what a production assistant did in her first week on the job.

Emma Keith, the National Theatre’s head of broadcast and producer of NT Live, has a degree in dance and a masters in digital culture. She saw the NT Live job advertised the day after handing her dissertation in, and has been with the theatre since 2008.

After doing a National Film and Television School course, Barnes’ first job in OBs was at CTV working on European golf for two years.

Some of the audience were still at school, and the panel was asked what they should do next, and what advice they could give all the students about working in broadcasting. “Choosing a course that has a proven track record is very important for graduates,” said Barnes, who did a course at Leeds for two years, before dropping out because it wasn’t delivering what she expected. With the increased cost of tuition now, it is even more important for students to research the right course.

“Don’t feel pressurised in going to university,” added Popplewell. There are opportunities elsewhere, including NEP or the BBC, for school leavers and apprenticeships. “Don’t feel you have to do three years at university, because if you’re not fully committed you’re potentially three years behind,” she said. “You can join a company at 18 in various different roles and enjoy the experience of being hands on.”

“There are loads of different jobs, and different skills. It is not just about being an engineer, or being a producer or director. In front of the camera, behind the camera, there are so many opportunities and organisations to work for these days,” said Keith. Almost any organisation can now be a broadcaster. “If there are areas where you have interests, it is inevitable that there will be organisations and companies in that area that will also be doing broadcast activity. It’s not just sport or linear television.”

“Working in TV is a team effort […] and until you understand that it would be a challenge,” advised Smith. “If your team is good you support each other.” She was determined to do everything that she saw the men in the team doing, and carry everything that the crew carried, “but that’s what teams do.”

“There is nothing like the thrill of live television. The day I don’t enjoy it is the day I decide to do something different. It is long hours, it is hard work, but we all do it because we really, really enjoy it,” said Keith.

The highlight of her career so far was doing Hamlet, played by Benedict Cumberbatch, in 4K. “It’s the biggest broadcast we’ve ever done,” and has been seen by about 750,000 people around the world since July. “It was nerve wracking, it was scary, I had that butterfly feeling in my stomach, and ultimately, at that point, my job is done and I can’t really do anything else and just have to sit there and watch everybody else and hope that it’s all going to go smoothly.”

Barnes also chose Hamlet, as NT Live was one of the first contracts she started on as an assistant, and on Hamlet she was responsible for sound guarantee.

Mills couldn’t name one highlight, because “it’s all been amazing really,” particularly the opportunities to travel the world.

Smith also chose “all of it,” as her highlight, but mentioned the sense of achievement each time a Big Brother series wraps and the challenge of working on productions shot abroad, such as Total Wipeout.

Popplewell chose William and Kate’s Royal Wedding, for which she was the director. “It was only afterwards that we realised how big it was. It was a brilliant experience.”

The National Theatre has been broadcasting plays since 2009, to cinemas in the UK and around the world, and has done 50 live broadcasts. “Organisations that you might not necessarily think of as broadcasters are going to be doing this more and more,” Keith said in an earlier session on National Theatre Live.

It has also produced its first movie, which was also distributed using the NT Live set up, with interviews and other material broadcast live from the premiere. In 2014 it did the first ever live UHD broadcast from a theatre to a cinema, and has since done four more UHD productions.

“We’re using the technology that has been developed in the outside broadcast world, but we’re creating a new experience,” one that the audience says is even more engaging than seeing the play live in the theatre, she said.

It has a small in-house production team and uses about 80 freelances on each broadcast. It is important to have “the best people, doing the best jobs.”

“The audience who go to cinemas are expecting Hollywood-quality content, and that is what we aim for, but we do it live. We don’t spend six months or a year in post production,” added Chris Bretnall, independent technical producer and owner of Creative Broadcast Solutions, who has worked on all the NT Live productions.