The IAAF World Indoor Championships, held at Arena Birmingham from 1 to 4 March 2018 through the accompanying snow storm, was attended by over 600 athletes from almost 150 countries. While the US led the medal table with six gold’s from a total of 18 medals, host country Great Britain and Northern Ireland came fourth in the rankings with two gold’s out of seven medals won. For NEP UK, however, it came top of its class as Filmnova Sport Productions’ OB and facilities supplier. 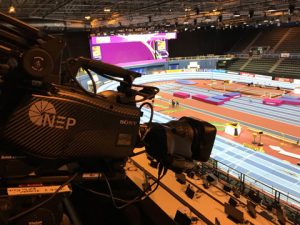 Kevin Orwin, technical project manager at NEP UK, spoke to SVG Europe about how the company got involved with the IAAF World Indoor Championships: “We bid for the event with Filmnova Sport Productions. They were successful in winning the contract from the local organising committee for Host Broadcast facilities and NEP were selected as their OB and facilities supplier to provide all pictures and sound.”

“NEP works on a number of sports and athletics events with Filmnova,” Orwin added. “Filmnova tends to do more road races throughout the year, such as ‘Great Run’ events. One of the things that helped our bid was the fact that NEP has covered quite a lot of athletics events. We have as good pedigree in covering athletics, in particular the London World Athletics Championships 2017, the previous Commonwealth Games in Glasgow, and we’re off soon to the Commonwealth Games in Australia.”

The initial brief for NEP UK was to come up with a solution to provide the integrated world feed as well as an individual feed of the track events and three production mixes of the field events (high jump, long jump, triple jump and shot put). The company had a good run up of six months prior to the event to work out the logistics.

As part of the HB operation, NEP UK produced blanket coverage of the World Indoor Championships. Over the four days of the event, over 80 hours of TV were produced, including a daily highlights programme. 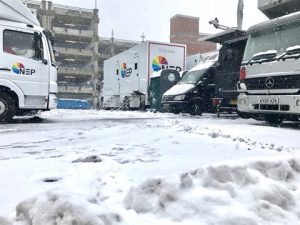 Challenges faced by NEP UK at this event included the sheer volume and subsequent complications of producing five independent programme feeds, Orwin said, as well as venue space for vehicles.

NEP UK used five of its own OB units, but, said Orwin: “Parking was tight, so trying to get everything parked and still leave access for safety vehicles and other suppliers was a challenge.” He continued: “The venue space in the service yard was quite limited so we had to be careful in our choice of the size of OBs we used; if space was unlimited, we might have used different OBs.”

Checking out the set up

The camera set up included Sony 4300’s in both HD and super slow mo, and Pico Antelope extreme slow motion Minicameras. Orwin stated: “We used 28 cameras in total to cover the stadium in total across five areas of coverage. We used a standard set up based on our experience within this stadium and at other athletic events.” 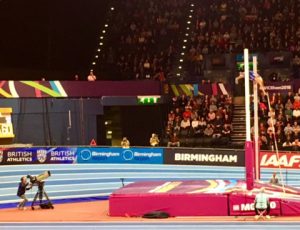 He continued: “We had used the Pico Antelope super slow mo cameras at the London World Athletics Championships 2017, and we used them again at this event. We use them on jumping bars, for instance on the pole vault, and for foot faults,” he added, noting the footage is great to be able to capture toes over the line for long jump events and the like. “People have started to request Pico Antelope super slow mo cameras more often now, because of the high quality of the reply they provide,” explained Orwin.

Concluding, Orwin noted: “All was very, very successful and people were very complimentary on the footage we produced. We base our success on the experience we gained from doing last year’s Athletics Championship Games in London, and the last Commonwealth Games, and we are now off to Australia for the Gold Coast Commonwealth Games 2018.”