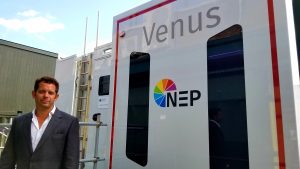 For NEP UK’s Richard Lancaster, technical project manager for Wimbledon, the end of The Wimbledon Championships on Sunday July 15 concluded a long run of visits to the All England Lawn Tennis Club as he and NEP UK team have spent more than a year planning out the new operations, studying the previous workflows, and figuring out how new workflows could best be addressed from a technical perspective.

“I have been working on this year’s Championships Wimbledon since last year’s tournament, spending at least two days a week on site for most of the year… and then it ramped up!” he says.

“This was a very large project not only in scale but also new technologies, bringing new hardware, software and workflows. The adaptability, resourcefulness, commitment and at times, patience of our crew blew me away. They really stepped up.”

Lancaster says that whilst the delivery of last year’s tournament was paramount, it was also about absorbing as much as NEP UK could with regards to the areas which were previously facilitated by other companies without stepping on toes, finding out how people worked, and what they wanted to achieve and then how that worked into what Wimbledon Broadcast Services wanted to be.  With the launch of WBS, there was a vision that the Wimbledon team wanted to achieve; in order to achieve that having a close working relationship with the club was key.  The biggest change from last year with respect to NEP UK’s role is that last year it worked primarily with the BBC, which was then the host broadcaster, on nine courts of coverage and the BBC’s presentation elements.

“This year we covered all 18 courts, seven of which were done in conjunction Fletcher, and as well as Wimbledon Channel, the World Feed, the Central Content Store and a myriad of small yet critical facilities around the site,” says Lancaster. “There’s so much to it now, and lots of different areas that have their own idiosyncrasies.”

“The adaptability, resourcefulness, commitment and at times, patience of our crew blew me away. They really stepped up.”

Since 2014, NEP UK has provided both host and domestic coverage of The Championships. This year, alongside three Scanners (covering Centre, No.1 Court and No.2 Court), the number of custom built galleries almost doubled with 10 production areas each with associated sound areas and a further 7 Production spaces for the Fletcher based TRACE Courts.. To support the broadcast, NEP UK made use of nearly 120 camera positions and more than 42 EVS servers, plus three major OB units and a large fly-pack core to broadcast the event.

The core of the facility is two completely redundant Grass Valley IQ modular systems that work in conjunction with Arista Network switches. The router is decentralized with various nodes around the Broadcast Centre for the rights holders.

“During the setup and as part of our proof-of-concept, we switched one of the two switches off and the entire system kept working – no one knew except us,” adds Lancaster. “The Grass Valley and Arista systems operate across two separate subnets so there was no cross-contamination between the two systems.”

The decision to go all IP and embrace the ST-2110 standard was one put forward by the NEP UK team during the RFP process and it extends outside of the broadcast centre to the two all-IP NEP UK trucks, Venus and Ceres.  Both trucks had been used by the BBC for the Royal Wedding in May, with one covering St George’s Chapel, and the other the Castle Route Interior, a project that Lancaster also oversaw.

“The Royal Wedding was a brilliant showcase for these two trucks and gave us a chance to test down conversion of the UHD HDR production,” adds Lancaster. “The HDR on Centre Court looked great, we had the racks team operating in standard HD SDR 709 with a separate Vision Supervisor working to the HDR, looking at offsets and the overall HDR output.”

The Sony HDC-4300 cameras were used with BPU’s, this gave us three outputs one 4K HDR 2020 that was delivered to one vision mixer, one 1080P HDR 2020 for EVS and then a 1080i SDR 709 that was sent into a separate vision mixer. The 4K mixer was programmed to follow the cuts performed on the 1080i switcher. Replays were handled via two sets of EVS replay servers: one set operating in 1080p HDR with 2020 colour space and then a second set in HD but with SDR and 709 colour space. Like the vision mixers, one EVS operator controlled both sets and the 1080p signal was upscaled to 4K.

One of the big changes with the move to IP and fibre is that endless amounts of copper cabling that used to connect the OB units to the MCR were replaced by about 12 high-density fibres. Like the router, if one fibre is lost there is a backup path to get the job done.

“I have to say our staff have blown me away with their commitment, dedication, and taking the new technology in their stride. We also had some great support from Grass Valley during the rig weeks,” adds Lancaster. “There has been a gear shift, and it requires a small leap of faith when working in IP, but the advantages in a workflow like this speak for themselves.”