The debut of EN3 for ESPN on March 30 was historic: it’s the first truck in North America built around a SMPTE ST 2110 IP routing core.

After a long standardisation process, SMPTE officially published the first standards within ST 2110 Professional Media Over Managed IP Networks in December, and EN3 is the first mobile unit to be designed and integrated specifically around the new standards suite.

Of course, installing the first SMPTE 2110 core was about much more than bragging rights for NEP. Rather, the IP infrastructure in EN3 allowed NEP to create one of the most flexible mobile units ever. The ability to function as a twin-trailer or a single-trailer unit will enable ESPN to “assign this resource to just about every level of show,” says ESPN VP, Remote Operations, Chris Calcinari.

“The primary concern that ESPN had was the flexibility of the mobile unit,” explains Nick Romano, engineering manager, NEP U.S. Mobile Units. “They wanted to be able to do a remote show [ranging] from a very large show to a GREMI [graphics remote integration] to a REMI [remotely integrated at-home production], which would lessen the amount of people onsite and allow more people work [on the show from] Bristol. It needed to be very versatile in terms of the systems integration. We gathered that information and sat down with our systems-integration team, who did a phenomenal job in hearing the requests and coming up with one of the most flexible units that I’ve seen in the industry.”

Single or double? It’s all up to ESPN

The two-trailer EN3 builds on NEP and ESPN’s previous two top-level projects — EN1 (home of Monday Night Football) and EN2 (home of Sunday Night Baseball) — and will be used primarily for the network’s NBA coverage.

With EN3, ESPN has the option of multiple configurations: as a twin, the A unit as a standalone truck, or, in confined areas, with the B unit’s expanding side closed.

“For ESPN’s changing production workflows, it had to have the firepower and production space to do a big-level NBA on ABC show but also the scalability and flexibility to go in and operate as a single-truck unit for a regional broadcast or a collegiate-sports broadcast, where we don’t necessarily need to utilise a B unit,” says NEP Senior Account Manager Michael Pean. “[Joe Signorino, VP, systems integration, NEP US Mobile Units] and his team have done an amazing job of giving us the flexibility to be able to do any type of show [that ESPN] needs in this truck.” 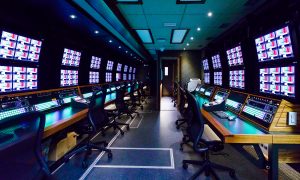 The B unit houses several flex console positions, allowing workstations ranging from replay to graphics to be positioned anywhere in the truck. In addition, all monitors at the individual workstations are on rails, so that they can slide together to build a production-monitor wall for a second control room if need be.

“The technical flexibility is important because the future is packed full of different execution models and potential standards,” says Calcinari. “One day, we could be doing a REMI or GREMI from this truck, and, the next, we could be doing a 1080p or 4K HDR show. The IP backbone, along with the most recent multi-standard production tools in every single area, will ensure that we are prepared to handle whatever comes our way.

“From a workspace perspective,” he continues, “NEP has done an incredible job allowing each space to be customized for a particular show. We required this system to run with or without the B unit, which allows us to maximise this resource across large as well as mid-level shows.”

Although EN3 is NEP’s fourth truck to feature an IP router, it’s the first with a “classic” footprint.

“We learned a lot over the last several years in relation to IP,” Signorino explains. “This is the fourth IP-based truck we’ve done, but they were primarily huge, five-truck systems. We always had an eye towards creating a more [classic] footprint and a lot quicker setup and strike. I think this unit helps define the near future for what we’ll be doing at NEP.”

Inside the truck: IP core and much more

Built around an Evertz EXE router (732×732 HD video) and Grass Valley Kayenne K-Frame switcher (128 inputs/96 outputs, 5.5M/E), EN3 is the first North American truck in which the router and switcher are fully interconnected via SMPTE 2110.

“When we started on the project [over a year ago], SMPTE 2110 was well on its way to completion of the video and audio portions of the standards,” says Signorino. “Obviously, we didn’t want to build something that we’d have to end up changing shortly, so we pushed several manufacturers to get on the bandwagon with us for a 2110 deployment and started getting more equipment connected via IP.

“You have to [accept that] certain gear may not be ready to work in the standard yet, but we decided to focus on a couple of key things. One was working very closely with Grass Valley and Evertz on the interface between the switcher and the router so that we could have those two devices connected together.”

By installing the IP router, NEP not only saved weight and space but also reduced power needs, noise, and heat. Nearly all the louder, heat-generating components are centrally isolated in the engine room behind a slider door, significantly reducing ambient noise and excessive heat.

“I think, if we tried to do this same thing in baseband, it would have been impossible because we would have been inundated with weight and space [issues] at that point,” says Romano. “The IP core allowed us to condense a lot of things and save in weight, heat, and space, allowing us to be a lot more efficient than what we’ve been in the past in the baseband world.” 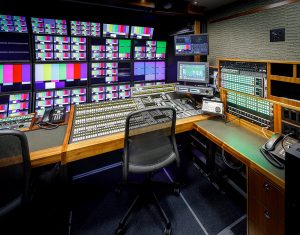 “Baseband still works very well, so the question becomes What does IP really bring to the table?” says Signorino. “It not only brings more flexibility but also scale, so you are able to scale the size of the system from one show to another and make something that is a lot larger than would be possible in an SDI-based system. That is certainly the case with EN3.”

The IP infrastructure and use of IP Gateways (IPGs) have also allowed NEP to significantly shrink its field fiber kits from the size of a small refrigerator down to a max of 16RU, according to Romano.

“A lot of the benefits of 2110 fall into the audio side of things,” notes Signorino. “We can do a lot more networked-audio connectivity right in and out of the router using the 2110-30 standards, which helps quite a bit.”

For comms, EN3 is equipped with a 368-port RTS Adam Intercom System.

Fruits of NEP apprentice program seen in EN3 crew
EN3 is also one of the first mobile units in which all three members of the engineering crew completed the NEP Apprentice program, which continues to produce field engineers for the company.

“I believe it shows that not only are we growing the technology but we’re also growing engineers internally that are able to come out and understand all the technical advances to the systems and designs right away,” says Romano. “The company as a whole is continuing to bring engineers up through our ranks, as well as providing training for all of our existing engineers on IP and every piece of equipment that we deal with.”

Looking ahead: ESPN continues down GREMI path
ESPN’s growing use of the GREMI model — in which graphics and some replay operators are located in Bristol but the equipment remains on the truck — played a key factor in EN3’s design. The network believes that IP-based trucks like EN3 will enable increased use of these workflows.

“[GREMI was] a very important factor,” says Calcinari. “The GREMI model has been very successful for us, and we are continuing to develop workflows that will allow further expansion of controlling devices, sitting in a truck at site, from our various studio hubs. The IP layer will clearly allow us to take the hub model to the next level.

“We’re yet to realise a lot of the potential of IP,” he continues, “but we’ve sure [headed] in the correct direction with the router-switcher integration. And, if we decide we want to add other IP-based equipment as it comes to market, we can easily add that.”

Although EN3 is fully capable of 4K and HDR production, there are no near-term plans to utilise these capabilities. However, Calcinari says, EN3 will be ready should ESPN seek to produce shows in these next-gen formats.

“Having this fully capable resource will allow us to continue our field testing,” he points out. “To the extent that ESPN has a requirement for one of these standards, we will be prepared to execute.”