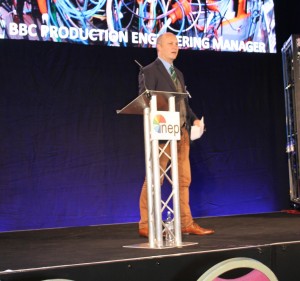 Outside broadcast services provider NEP Visions invited media students from institutions all over the UK to its inaugural Student Open Day in Bracknell on 7 October 2015. Over 150 media students from five colleges attended the event, gaining hands-on experience in a working outside broadcast environment and receiving advice on careers in broadcasting from representatives from the BBC, BT Sport, ITV Sport Production, Sky Sports and Creative Broadcast Solutions.

Students from Southampton Solent University, Ravensbourne, Leeds Beckett, Kingston College and Farnborough College of Technology attended the event, where a distinguished list of guest speakers discussed the realities of broadcasting live events, gave advice on getting into the industry, and answered a host of questions. 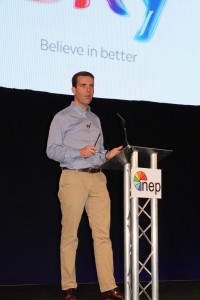 In addition, the company set up a five-a-side football match in the grounds of their Bracknell HQ, with cameras placed around the pitch for the students to operate and capture the action. All feeds from the cameras were available inside NEP Visions’ state-of-the art truck, Atlantic, where EVS machines and sound equipment were set up for the students’ use.

“It’s so important to engage directly with this next generation of engineers, operators, editors and producers to give them an idea of how the industry works outside of a training environment,” said Steve Jenkins, managing director, NEP Visions. “We’re delighted with the reaction we saw from the students – their enthusiasm and keenness to learn was great to see, and there is clearly some fantastic talent coming through that we need to nurture. I would like to thank our clients for generously giving their time to share their experiences and the NEP Visions team for making the Open Day such a success.”