It’s been just over two weeks since NEP Visions suffered a devastating fire that destroyed six remote production units. But in the weeks hence the UK teams as well as NEP operations around the globe have stepped in to ensure not only that NEP employees are taken care of but that clients are as well. “The Visions team has done more than 30 events in the past two weeks and met 100 per cent of their commitments,” says Kevin Rabbitt, NEP Broadcasting, CEO. “And they’ve covered a wide range of clients in those events and have the schedule covered through the end of February.” 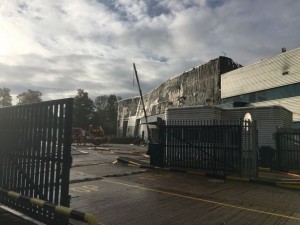 The NEP Visions team has met the needs of more than 30 clients since a fire ripped through their warehouse and headquarters two weeks ago.

Rabbitt says he has been “blown away” by the leadership of NEP UK and Ireland President Steve Jenkins and the ability of everyone involved to stay focused on the task at hand.

“From a support perspective we really pulled on the NEP Group and our worldwide network with 25 HD cameras and 10 EVS units shipped into the UK from around the globe,” says Rabbitt. “We also used mobile units and engineers from the Netherlands, Ireland and Belgium and VER and Finepoint were also a tremendous help.”

The NEP Visions base staff is currently operating out of temporary offices about a kilometre from the destroyed warehouse location. Meanwhile more than 40 different OB units and tender trailers as well as related maintenance and shipping operations are located at the Ascot Racecourse.

Two weeks after the fire there are now three core activities going on to return operations back to normal: finding a new office space and garage; ensuring the employees are okay emotionally as the adrenaline of the first few days following the fire wears off, and completing the plan for rebuilding the destroyed production units.

“We are taking the learning and knowledge of new technology and rebuilding the units to be something that is stronger than what they were before,” says Rabbitt. “So we will leverage our capabilities to do multiple projects simultaneously and in early 2016 we will start seeing new OB units roll out.”

Making that happen will involve design and integration teams in the U.S., the Nordic region, and the Netherlands as well as third-party integrators if the need arises.

“WE still think about the terrible tragedy that is was but there was also great leadership and courage from the team and the support of our worldwide network,” says Rabbitt. “We are going to turn it into a positive and rapidly rebuild and become stronger.”