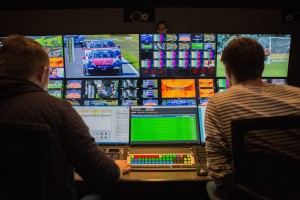 “We will take over the running of the Ziggo Sport channels on 12 January,” explains Karel van der Flier, the Chief Commercial Officer (CCO) at NEP The Netherlands. “We are in control of all aspects from sourcing to distribution, with all parts of the broadcast chain involved. Although we are not directly responsible for the editorial production of the output, we provide space within our facility at the Hilversum Media Park for the personnel involved in that part of Ziggo’s programming. Some of those people are directly employed by Ziggo, the others come from independent production companies.”

Van der Flier points out that as well as programmes produced from within the Netherlands, NEP provides the facilities for taking in broadcasts from other countries and adding Dutch graphics or voiceovers for the domestic audience.

Ziggo Sports is located in NEP Studio 11 in the heart of the Hilversum Media Park. Since May 2016, the area has been completely transformed into one integrated workspace, including production offices, edit suites, galleries and playout facilities.

Within the studio itself, three sets are provided to accommodate the various programmes that complement the remote broadcasts. “The studio has an area of 6000 square feet and is used for continuity, sports news, Peptalk Ziggo’s talk show, and the Formula One programme, as well as other daily scheduled productions,” explains Gerbrand de Ridder, NEP The Netherland’s head of R&D who was heavily involved in the contract process. “Depending on the demands of individual programmes, we use between four and eight Grass Valley LDX cameras, although this number can be readily increased to meet specific requirements. All the cameras are connected to our Cloud Production platform, so it is very easy to add extra facilities and allocate resources as they are needed.”

He continues: “We made the decision to have all the cameras manually operated – either on a crane, on dollies or handheld. The directors find robotically operated cameras somewhat limiting when there are different areas of the studio in use and with a fast turnaround sometimes required between shows. Having tracks on the floor or the ceiling restricts those repositioning movements.”

De Ridder adds that another reason for opting for manual operation was the use of augmented reality (AR) in a number of programmes: “We are utilising our own NEP-created system of AR for a daily show that has a great deal of creativity within it and which can easily be integrated in the production workflow. And it proved much easier to achieve that high level of production value with manually operated cameras. In fact, many programmes are a combination of AR and virtual reality. And, of course, there is a big green area where people can stand in an AR environment.” 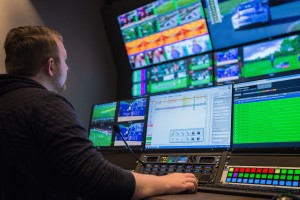 He says the green screen space will be used as a virtual set and which is very flexible and allows, for example, football players to be placed in the augmented reality set-up and for the presenter to appear to walk through the team. It also allows the presenter in the studio to be virtual at the side of the actual playing area at the stadium. “We have combined all the ‘tricks’ we have used in the past to take the technology to new levels. And by using reality rendering engines instead of normal broadcast render engines we can achieve a much higher level of photo realistic images.”

What’s more, NEP’s technology is connected to the augmented heads, allowing the same system to control the AR, the virtual graphics, titles, and the physical display screens in the sets. Consequently, just one operator with one push of a button can control all the layers in the different graphic systems. “That makes this combination of actions unique – and creates a flexible and scalable system,” says de Ridder.

In the gallery, NEP The Netherlands has opted for a Snell Advanced Media SAM Kahuna vision mixer. “In the galleries where we enrich the feeds coming in we use a SAM Kula – the smaller brother of the Kahuna. In fact, we have six of them,” says van der Flier.

For audio control, Lawo mc² 56 consoles are in use.

Alongside traditional control from the studio galleries, those facilities can be used just as readily for CloudProduction. “Even ahead of the launch of the Ziggo channels, we were doing this anyway,” states de Ridder. “We can connect any sources from anywhere using our cloud technology. And we can shade the pictures from our facilities here in Hilversum. In effect, we use the galleries as a master control room, storing highlights and building the programmes around all of the sources.”

He says that during 2017 it is anticipated that all of the Ziggo Sports programming will be handled in this way – with just cameras in the location and all production handled from the studio.

SAM has also been the choice for Qube editing systems. “We looked at all the systems on the market and decided for the fast turnaround that is needed for sport, the requirements for highlights packages and slo-mo replays, that the SAM sQ platform combined with LiveTouch was the right solution for us. That selection also meant that a close integration with live ingest is achieved,” declares de Ridder. “In short, we decided to go for a full SAM Quantel workflow – and that even includes the 24/7 playout channels on Morpheus and ICE.”

NEP says that building a system that is based on their proven cloud technology has been key to the successful implementation of this contract. It means that expansion is easily achieved as and when additional resources are required. “We have created a very flexible system that will meet the needs of our clients for the foreseeable future,” says de Ridder.

Van der Flier sums up the benefits of the type of contractual arrangement that is in place with Ziggo Sport: “Over the recent past we were not only in charge of the capturing process for our clients with our trucks, studios and related technical facilities, but began to see the need for an end-to-end solution. We call this glass-to-glass – from the lens at the venue to the customer at home – and we looked to provide a managed service. It’s of little value providing just bits and pieces of a service – but by offering a managed service and by NEP focussing on the technical parts, the client can concentrate on his main purpose, content, rights and so on.”

He reports that NEP has experience of this arrangement working well in the Nordics, and that the company plans to expand this concept into other countries in the near future.

“There is a huge demand from all the major players to outsource the technical parts of their operations,” he concludes. “That method of working means their technical operations are futureproof. Just as important, it means that the facilities are being used in the most economical and efficient way. Sharing resources between different events makes a great deal of sense. Everyone benefits.”