The 146th AES Europe Pro Audio Convention comes to Dublin next week and with it the newly-elected president of the Society, Austrian audio engineer Nadja Wallaszkovits.

In January the quarter-century association of Wallaszkovits with the AES entered a new phase with her ascension to president — the fourth female to hold the office. In this role, she told SVG Europe, she anticipates particular emphasis on “improving the diversity” of the organisation as well as continuing to develop its events and standards programmes.

Having studied ethnomusicology and sound engineering at the University of Vienna, Wallaszkovits has gone on to enjoy a successful career in academia and the recording sciences. She joined the Austrian Academy of Sciences in 2005 and currently holds the position of chief audio engineer at the Academy’s Phonogrammarchiv.

Within this role Wallaszkovits has a particular interest in the restoration of acetate media, and now oversees the management of a public/private partnership collaboration between the Phonogrammarchiv and NOA GmbH, as well as international and EU projects.

Her association with AES has been similarly distinguished, including various organisational positions 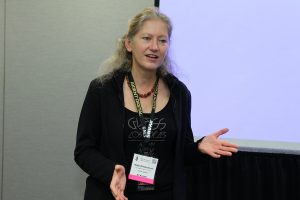 Nadja Wallaszkovits: “I also have a unique and exciting opportunity to work as part of a female triumvirate with Agnieszka Roginska as president-elect and executive director Colleen Harper”

(VP central Europe, chair and vice chair of the Austrian section, Convention & Conference organisation, etc), as well as sitting on the Technical Committee on Archiving Restoration and Digital Libraries, and working on standards as part of the SC-07 Subcommittee on Metadata for Audio. For the past year she has served on the Executive Committee of the AES Board of Governors as president-elect.

Now, of her ascension to president, Wallaszkovits said that not only does she “have the honour of being in a position of the highest service to our industry, I also have a unique and exciting opportunity to work as part of a female triumvirate with Agnieszka Roginska as president-elect and executive director Colleen Harper. It’s the first time that there have been three women at the top of the AES management, and we are already in constant dialogue about our strategies and objectives.”

Many of these revolve around what Wallaszkovits termed “the three Cs – communication, coordination and cooperation”. And while the ‘female triumvirate’ – making a total of eight female members of AES Board of Governors, with four serving on the seven-member Executive Committee – is obviously good news both for the association and for the industry as a whole, one of the primary objectives will be to “promote and encourage an AES membership that is more geographically representative and is more inclusive. We want to make sure that we implement this principle in all aspects of the organisation, including the events, internal structure and outreach.”

Encouraging more people from a wider range of backgrounds to take an interest in the society and its work will be critical – hence the parallel focus on enhancing AES student initiatives. “Students are our future and they hold tremendous potential for our industry,” said Wallaszkovits.

“We do have a lot of the elements in place, including regular student and career development events, as well as our student recording competition. But we think there is more work to be done in terms of coordinating the various initiatives, and to that end, we have established a team around that education committee who will cover and coordinate all the student sections worldwide. That will be overseen by Magdalena Piotrowska, one of our female AES governors.”

The future prosperity of the European convention is also set to be a priority consideration as Wallaszkovits settles into her new role. At the time of writing there has been an encouraging level of uptake in the next European AES convention, which will take place at the Convention Centre in Dublin next week.

Wallaszkovits remarks that the attendance and participation in European conventions –AES’ and those of other organisations – has been variable over the last decade, impacting attendee and participant perceptions. “In Europe, there are a number of industry events going on, some in parallel,” she said. “Planning further ahead and keeping the industry informed about our future convention schedule is another of our priorities.”

To meet these challenges AES will increase its emphasis on outreach with potential European convention exhibitors and attendees throughout the year. “Colleen Harper and the team will be working hard on helping us to plan further ahead in terms of actively engaging companies about their wishes and needs, and encouraging them to grow and find new markets.”

The association’s efforts will be further strengthened by the recent introduction of an industry relations task-force, which is “working on increased engagement of the industry and the determination of specific goals that can help audio professionals to stay on top of the trends. By stepping up our efforts in this area we will be able to better understand manufacturer needs, and actively engage companies within our committees and working groups in order to improve and expand these relationships.”

In pursuing the continued expansion of the society’s reach it certainly does no harm that a number of the standards it has developed in recent years have gone on to enjoy significant global traction – and none more so that AES67, which provides a certain level of interoperability between existing IP-based audio networking technologies.

“AES67 has made a crucial contribution to the use of IP networking in the professional arena by providing a common baseline for exchanging high quality audio on general purpose networks. And since it was published in 2013, it has also served as a seed for other standards, including SMPTE ST 2110, which includes an adaptation of AES67,” noted Wallaszkovits.

Whilst the escalating adoption of IP-based audio will doubtless remain an abiding concern, the association will continue to devote considerable energy to technologies that are presently in a more nascent state – immersive and other technologies falling under the Next Generation Audio (NGA) banner being an obvious example.

“It’s still at a fairly early stage in terms of the broadcast industry, but there is a lot of interesting experimentation going on,” agreed Wallaszkovits. “3D and immersive media production is definitely an active high-level topic for us, and in fact there were a number of related sessions at our convention in New York last October.

“It’s a fascinating area and my expectation is that, sooner or later, all broadcasters will be participating in NGA and bringing immersive services to their audiences.”