The current COVID-19 pandemic brought big changes to the production of the German Film Prize 2020 (Deutscher Filmpreis). The award ceremony on 24 April was not realised as a gala with an audience but as a studio production, where the prize winners and guests were added to the live broadcast via video feeds from their homes. 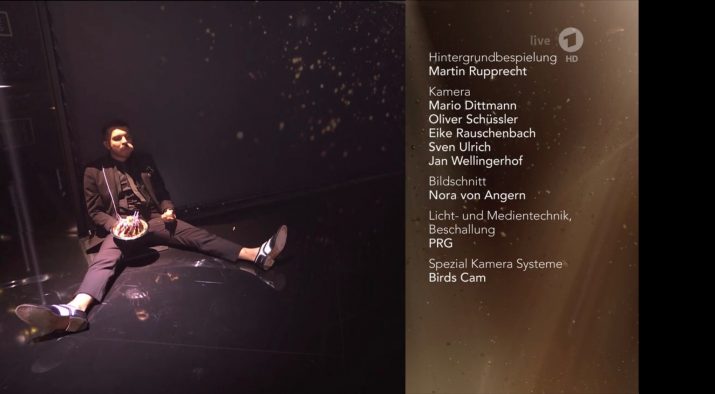 Presenter Edin Hasanović found himself in a studio setting, in the middle of five large video screens that were used to switch to the guests. Artistic director Sherry Hormann, however, did not want to do without spectacular pictures and camera movements. To deliver these pictures despite the challenging setting, the production used the Birds Cam cable camera system from German supplier Birds Camera Solutions.

The Birds Cam is the smallest and lightest cable-based camera system currently available in Germany and is new on the market. The system, which was used for the first time in Germany, can cover an area of approximately 80 x 80 m and is suitable for productions with limited space or in small studios because of its low weight and the compact and individually placeable winches.

Despite its small form factor, the system allows fast movements in all three-dimensional directions. The dolly is supplied with power via the ropes, which significantly reduces its weight and results in low rope sag. Because of the five high screens located in the studio, the Birds Cam was the only system that could be used there, as it has the lowest sag of all existing systems and could, therefore, interact with the screens.