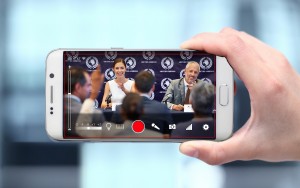 NewTek has announced the introduction of NewTek NDI Camera, a software application capable of turning any compatible iOS or Android mobile device into a wireless, IP-ready, live video source. When connected via WiFi to the same network as an NDI-compatible receiving device or production system, NewTek NDI Camera allows producers to instantly and affordably add cameras, angles, vantage points and completely new options for live broadcasts, webcasts and presentations with the ease of a mobile device app download.

“With NewTek NDI Camera, anyone with a smartphone or tablet can serve as a camera person or contributor to your video content,” said Dr. Andrew Cross, president and CTO of NewTek. “It’s not only an extremely affordable method of adding multiple video sources to any production, but it means that almost anyone who wants to participate in a live production already has a camera in their pocket, including audience participants and students. This application puts IP production within the reach of over a billion mobile devices available with high quality cameras.”

Output from a device running NewTek NDI Camera is automatically recognised by NDI-compatible receiving devices and has full support for connection notification and tally information. In addition, there is full control over focus, exposure and zoom to achieve professional results from almost any mobile device.