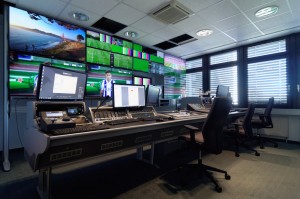 Known as the Cube, Sky Deutschland’s new centre is scheduled to open in 2017 and will comprise two studios of 600 sqm and 250 sqm, plus an additional new surface of 250 sqm for Bundesliga coverage. There will also be rooms for direction, editing and production, as well as for continuity suites and the broadcast IT installation. When it is completed, the Cube will be one of the largest and most modern broadcast IT infrastructures for live sports production in Europe and will create more than 40 full-time jobs.

Jünger Audio’s D*AP products were chosen for this prestigious installation because every device incorporates a collection of sophisticated adaptive processing algorithms that enable them to deliver a Smart Audio experience. With D*AP, broadcasters can dispense high quality sound in a very efficient manner, with minimal requirement for manual control or intervention from an operator. The processors employ the industry standard Ember+ remote protocol that allows seamless integration with an increasingly wide range of compatible equipment. They also support Audinate’s Dante digital media networking technology, which enables them to interface with Audio Over IP networks just by plugging in a single cable.

Working in conjunction with Qvest Media, which is responsible for the turnkey, technological construction of Sky Deutschland’s new centre, Jünger Audio has supplied two D*AP CODEC Edition 8-channel surround processors and two D*AP FLX 8-channel surround processors, all of which have SDI and Dante interfaces. These will be used to decode Dolby from incoming feeds so that channel shuffling and mix preconditioning can be applied to individual national feeds. In addition, Jünger Audio has supplied four D*AP TAP Edition 8-channel surround television audio processors, which will be used for loudness management and final Dolby E encoding. The entire audio processing system is controlled by eight XAP RMI universal remote control panels.

Daniel Url, managing director of Qvest Media, says: “We have designed the system around Jünger Audio devices to meet Sky’s high demands on flexibility and audio quality, so Jünger Audio’s Smart Audio concept really was the system of choice for both Sky and Qvest Media. During the installation, we received excellent support from Jünger, as the system was installed in a record breaking time.”

Peter Poers, CEO of Junger Audio, adds: “The people responsible for this project at Sky and Qvest understood that if Jünger Audio was managing the facility’s audio processes then they could expect high level performance. And that’s exactly what we have delivered – trouble-free audio control that also offers high grade automation. Sky’s installation is a Smart Audio solution because it makes use of intelligent and complementary audio algorithms throughout the broadcast chain and combines them with perfect control integration. The result is an impressive, forward-looking system that delivers the best quality with maximum efficiency and flexibility.”

Sky Deutschland’s new Cube will produce all its live sports programming, including the Bundesliga, UEFA Champions League, UEFA Europa League, EHF Handball Champions League, golf, tennis and Formula 1. It will also be used to create content for digital platforms and for Sky Sport News HD. The first trials are planned for June 2017, while the first live productions to air are scheduled for July 2017.