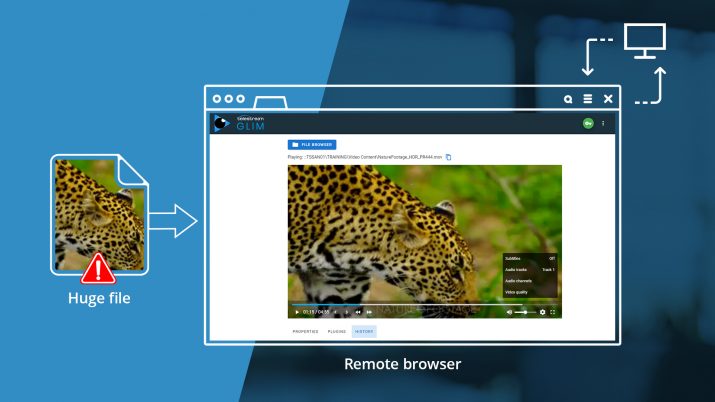 GLIM was built to solve well known remote work challenges where remote employees waste hours every day downloading mezzanine grade media files just so they can be played back. Many collaborative video production applications require transcoding prior to uploading to the site. It allows users to play files immediately, from a browser interface, without any delays caused by transcoding and uploading. It supports playback, frame scrubbing and stepping and display of file properties and metadata. The GLIM playback experience is claimed to be superior to remote and virtual desktop techniques.

“Without GLIM, seeing, hearing and understanding the technical properties of media libraries from remote locations has been nearly impossible. With GLIM, you can now play the unplayable,” said Scott Matics, director of product management, Telestream. “Our customers tell us they’ve wanted a product that could do this for years.”

The GLIM engine is built for remote playback of common broadcast quality containers, codecs and resolutions including varying fps, audio channels and colour space combinations. GLIM has been engineered to playback high resolution and high bit rate media files over bandwidth-constrained internet connections such as working from home while connected to a VPN. GLIM allows users to not only play large media files, but GLIM supports inspection of containers, video, audio, and metadata properties.

GLIM leverages standard technologies to display media in a browser that requires no additional software to be installed by the client. The GLIM engine contains a plugin architecture to interact with Vantage and other third-party systems via web service (REST) calls. This feature is quite significant because it allows users to customise how GLIM works within their specific environment.

“Saving your team time and resources by remotely viewing large and tricky files has never been easier, even if those media files are comprised of one or more high definition formats, codecs, and containers such as MXF-wrapped DNxHD,” said Matics. “It’s truly a game-changer according to our customers.”