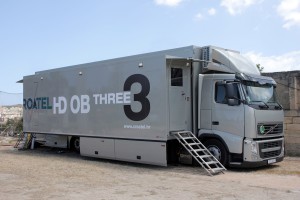 Croatel has just added a third HD OB vehicle to its inventory.

Zagreb-based Croatel has been active in the production market for more than 20 years and currently employs a staff of sixty. “Our main business since 2007 has centred on HDTV production,” explains managing director Tonko Barac. “Our technical production includes High Definition OB vans with multiple camera chains, multiple super-slow motion camera systems [and] editing equipment, but also ownership and realisation of an HD multichannel playout system, including a satellite teleport facility and ENG crews.”

To handle the increasing demand for its services, Croatel has just added its third HD OB vehicle. Built on a Volvo FH420 chassis, HD OB3 measures 11.9 metres long, 4 metres high and has a width of 2.5 metres with a further 9 metre side opening. The coach building was carried out by TVC – UAB Televizijos Ir Rysio Sistemos from Lithuania.

“They did an excellent job,” says Barac. “The coach includes motorised drums for triax or fibre cables, separate isolated rooms for audio console and operator, production area, SloMo and engineering areas. We oversaw the entire video/audio project, which was finalised in cooperation with AVC Croatia.”

Barac goes on to explain that the company has experienced considerable expansion since its last truck was commissioned in 2011, adding that HD OB3 will be primarily used to fulfil all the requests for Champions League, Europa League and Croatian Football League coverage. “Although a great deal of our work comes from within Croatia, we work extensively outside of the country – and can even service clients on other continents, too. Sports represent our main market, but we can readily handle other genres, too.”

The GV theme extends to a Karrera Video Production Center Switcher with control panel and compact K-Frame video processing engine. The software-based Karrera is built on a modular approach, making updating easy when it comes to the demands of new applications. “We have been using a Grass Valley production switcher for many years and know the equipment will fulfil all of our technical requests. And, of course, our production staff is very familiar with the way it operates.”

On the audio side, the choice has been made for a Studer Vista 5.1 M3 console with 72×72 AES input/outputs and 32 analogue stereo outputs. Also included in this investment are Meterbridge and a Vista Compact Remote, which is used as a slave or secondary console.

“We have EVS XT3 with open configuration and all the options, as well as EVS XT2+,” states Barac. “And to meet the specifications laid down in the production manuals of the Champions League and Europa League, we are obligated to always have one HDCam recorder and five Blu-ray recorders on board.”

Barac concludes: “This new vehicle is a major investment for Croatel, but I am very optimistic about the future. There are more and more sport HD TV productions and HD has become a standard, so we think that we are on the right track. Although the economic situation is not so brilliant, we always feel the need to think positive. And because of that, we believe that HD OB3 is the most appropriate choice for high-quality HD production – and it can meet any technical request that we receive from end-user customers. In a way, we consider ourselves forerunners in the HD production in this region.”