Nowadays, even before the umpire blows his whistle for kick-off, spectators inside the stadium have already followed a variety of TV entertainment with live coverage, information and ads via modern LED screens. This includes the Stuttgart Mercedes-Benz-Arena and the fans of soccer club VfB Stuttgart. 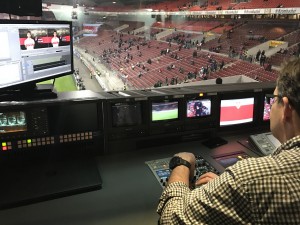 Right on schedule for the start of the second half of the season of the National Soccer League in Germany, new wireless camera technology was made available at the stadium. This was planned and designed by HDwireless of Mechernich near Cologne, and installed as commissioned by Netze BW GmbH who are the operators of the stadium audio and video technology.

Live transmission in the 1080/50i format was specified to be available from each and every angle inside the stadium, to be applied with the telemetry for Sony cameras and camcorders, in order to guarantee the control systems handled by the stadium-direction to function stable. HDwireless project leader Sebastien Coat said, “Our ClipOn 1700 is the perfect tool for this operation as it is efficient and can be used with any of the various Sony cameras the customer may employ.”

The transmission unit for the radio segment will be mounted to the desired camera by means of the V-Mount adapter, which is also applied for transmissions using the camera battery. This technology called ‘Power through the line’ – PttL – takes care of the power supply for camera and transmitter via battery.

With its transmission power of up to 250 mW the RF transmission remains stable from the internal space to the permanently installed antenna on the roof of the arena. In order to protect the system against high frequency interruptions from mobile networks, for example, additional canal filters were built in between the RF-antenna and down-converter.

To ensure flawless and fail-safe distribution of the various signals between antenna, down-converter and the production area, HDwireless renewed the entire cable system. “With the introduction of the new wireless camera technology inside the Arena”, Gert Laabs of Netze BW commented, “high-class live transmissions of all soccer events in future will guarantee top entertainment for the spectators inside the stadium.”