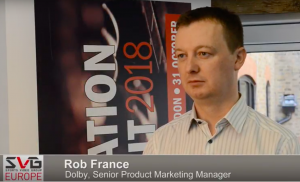 SVG Europe has begun to share video interviews with speakers recorded at the third annual Next Generation Audio Summit, which took place at Dolby’s premises in Soho Square, London, on 31 October.

During the course of the day SVG Europe Contributing Editor David Davies garnered opinions on the outlook for next-generation audio technologies from a number of speakers, including Rob France (Dolby), Felix Krückels (audio engineer/consultant/educator), Stephan Sandford (Clear-Com), Phillip Myers (Lawo) and Thomas Lund (Genelec). The interviews were filmed by Chris Taylor and edited by James Cumpsty.

Several videos have already been posted to the SVG Europe YouTube channel as part of a dedicated Next Generation Audio Summit playlist, which can be accessed here. More clips will be added in the coming days.

Also added to the playlist is a video shot by Dolby’s in-house team, featuring input from both speakers and delegates. Many thanks to Dolby for their permission to share this clip on the SVG Europe YouTube channel.