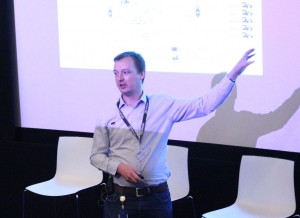 Summer 2016 saw Dolby and a number of other leading audio vendors participate in significant immersive audio technology trials during the EURO 2016 Championships. In a special case study delivered as part of the SVG Europe Next Generation Audio Summit on 10 November, Dolby senior product marketing manager Rob France reflected on the challenges involved and how they might be applied to major sports tournament coverage in the future.

Recalling the unwelcome quantities of precipitation that characterised stretches of the Championships, France admitted that it was “not exactly the sunny time [I would like to be able to] take you back to. The studio was intended to be on a barge, but [due to the high levels of rain] there were quite a few people running around panicking and wondering where to put the studio…”

Despite the challenges involved during the set-up period, the team pressed ahead with a “very standard mic plan”, due in part to the mics being selected “well in advance of Dolby Atmos being involved, [but UEFA] was keen to do a test around Dolby Atmos with 4K. The only difference in terms of the feeds that went to the 5.1 production was that we got feed from the top four capsules. Effectively 3D-based sound was used to build a Dolby Atmos mix…”

In the designated mix room four overheads speeds were installed to help the team mix the height.  A Lawo MC256 desk was at the centre of operations. “All the mic feeds came back here; everything was [focused] around connectivity,” said France.

The Dolby Atmos production did involved the “separation of a few key objects”. Perhaps most notably, the dialogue was kept separate to provide some valuable data on how it might be possible to start giving consumers “some level of dialogue control; not full control but some degree”.  France also noted that keeping dialogue and PA separate means that “when you do things like headphone virtualisation you can do a much better job”.

One of the primary outlets for the Dolby Atmos mix was a “demonstration area where we were playing it back through a soundbar.” The mix was distributed within the IBC by a circuit previously used for alternatives matches; the Match D circuit.”

Chinese broadcaster CCTV was also keen to take the Dolby Atmos mix back to Beijing. Having built its own dedicated room for the demo “CCTV took that off [the Match D circuit] embedded with regular HD delivery” – but alas it arrived in Beijing “hugely out of time. Fortunately satellite links make an amazing 4K delivery, [so the issue was resolved that way].”

Aside from the need to swap out one of the displays for another brand – “some 4K TVs are not as good as others,” said France – one of the greatest challenges was provided by the undulating fibreglass roof of Marseille’s football stadium. The “wonderful wavy design of the roof” was “not just a nightmare for [the Atmos component]; it was also [tricky for the whole of the audio production] because the PA picked up multiple times on every mic in the environment.

“There can be so many challenges getting a decent stereo mix one thing that has to be thought about with regard to immersive is that when problems happen you have to make sure you can still get [these different mixes] out there. If you have a generally relaxed environment like you have at the EUROs it is frequently the case that when you get through the first few days you have a formula and its work OK – but you might then turn up at [a venue like Marseilles] and suddenly you have all these challenges…”

Nonetheless, it is evident that France and the rest of the Dolby Atmos team see huge opportunities in terms of bringing the technology to bear on future sports events.