Next Generation Audio Summit: engineers and consultants ponder the potential and ‘real world impact’ of NGA 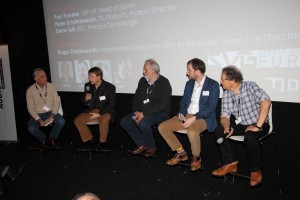 For a key panel session at the recent, inaugural SVG Europe-Dolby Next Generation Audio Summit – which took place in London on November 10 – a number of broadcast sound engineers, systems integrators and consultants analysed the production challenges set to be heralded by the mass adoption of NGA technologies.

Tuff was among those to highlight the problems for audio caused by TVs “becoming more beautiful and thinner and thinner” and the possibility that “the magnificence of the pictures [could be to the loss] of the audio.” Perhaps to help address this potential imbalance, the BBC has undertaken a number of NGA-related experiments –“the first toe in the water being a 2011 trial on Centre Court at Wimbledon, where we presented two sound options: a stereo court atmos and a single mono commentator feed.” The response from those who experienced the trial was that it was “divided equally between those who wanted more audience and those who wished for more commentator”.

While experiments around the tournament have continued, the BBC has also joined a Europe-wide project known as Orpheus. This European research project is dedicated to improving the management of audio content, and will develop, implement and validate a new end-to-end object-based media chain for audio content. The approach will see immersive content represented as a set of individual assets together with their metadata describing their relationships and associations.

Not surprisingly, the importance and complexity of the necessary metadata was a vital thread of the conversation. Moving into the next generation world “just isn’t going to fly without the metadata; you need to be able to convey that throughout the workflow. Another important aspect is that it needs to be synchronised with the audio and the video.” Standardisation is a critical part of the process, but “there is a lot of very important work” still to be done there, noted Fournier.

By way of example, he pointed to the current SMPTE 2110 standards project, which whilst hugely beneficial is “focused on transportation matters, with some consideration of synchronisation”. (For those unfamiliar with the initiative, SMPTE began work on SMPTE 2110 in January 2016 with the aim of developing a set of standards to specify the carriage, synchronisation, and description of separate elementary essence streams over IP for the purposes of live production, based on the VSF Technical Recommendations TR-03 and TR-04.)

There was also some detailed discussion of the implications of NGA from a production viewpoint. Tuff remarked: “As a sound recordist you end up with a lot of stems that are going to be fed out, and alongside these streams there has to be a mix made that the production people are entirely happy with… You then need to be able to put out all these streams and let the listener decide what they want to hear.”

As a facility provider, noted NEP’s Fournier, “we have to be led by the broadcasters… we don’t ‘deliver’, if you see what I mean, we only deliver to their specifications.”

One of the great challenges going forward will be accommodating “the difference between the creative intent and how the [production and technical personnel] operate the machinery,” said Tuff. “We don’t yet have functional workflows and processes [for NGA], so part of the challenge is knowing where the interfaces are and where one bit [of the workflow] hands onto the next.”

Although sports is bound to be a primary driver of NGA adoption – variously to accompany 4K/UHD and/or other premium content – Tuff noted that the “other key genre is live music”. NGA is “not going to take off” particularly rapidly, but broadcasters have generally been quick to recognise the “immediate benefits”.

Nonetheless, there was a general feeling among the panel that NGA heralds a host of exciting opportunities for broadcast applications across the board – so the next few years promise to be highly exciting as the audio component starts to rival the dynamism of its visual counterpart.