Next Generation Audio Summit: exploring the challenges and benefits of remote production 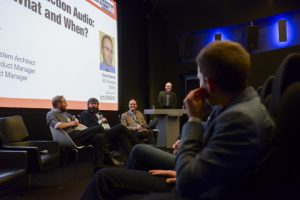 At SVG Europe’s Next Generation Audio Summit on 9 November, the session entitled ‘Remote Audio Production, Why, What and When?’ examined the practical, technological and economic benefits that could come from consolidating sports event audio production back at broadcast centres. The session also acknowledged the fact that it is still relatively early days for ‘true’ remote audio production in Europe.

Christian Struck, senior product manager at Lawo, stated that the definition of remote production varies greatly between Europe and the US. He commented: “Remote production is defined separately. In North America customers will call remote production an OB and will say it’s been around for 20 or 30 years. But one of the solutions to mixing audio and video is doing it remotely from a centralised site.”

Magnus Danielson, systems architect at Net Insight, noted that remote production “is already here”. Regarding which sporting events attract true remote production, he said it is a top-down process, commenting: “It’s really when you do the large productions that you push the limits, and that’s when you can start to use what you’ve learned. You’ve built the systems; they’re there,” he said, and as you have all the technology at your fingertips it is therefore logical to begin covering niche events aimed at smaller audiences.

Is AES67 the answer?

Audio over IP is a key issue within the field of remote audio production. While cameras have been controlled remotely for some time, audio is a more complex matter. Moderator of the session, SVG Europe Editor David Davies, asked the panel for their thoughts on whether the standard AES67 was being used successfully for this purpose as yet. Peter Walker, product manager at Calrec Audio, commented that is it still early days: “People are doing a lot of trials with AES67. There are a lot of challenges still to work through, such as PTP over WAN across firewalls, so we don’t need to have highly skilled engineers at venues.”

However, Walker continued that this service is one driven by cost savings, and therefore it is being pursued: “This is a cost-saver, which is why broadcasters are looking at it, but it’s also about efficiency. Broadcasters want to cover more live and niche events, but advertising values are lower at those events. However, remote production allows broadcasters to produce all these events.”

The panel then spoke about further efficiencies provided by remote production of audio. By centralising production, the same teams can be used to ensure consistent and high quality audio. Struck said: “If you’re in your facility in your headquarters you have different infrastructure possibilities compared to a traditional truck, bringing transmission to a different level.”

This improved consistency of production is something to be taken advantage of, said Danielson, who commented: “In the US football as a production moves around stadiums, but production quality remains very level because you can have the same people doing the production every week.”

One area that needs to be considered in the attempt to move to remote audio production is the engineering skills that underpin it, noted the panellists. Engineering skill-sets have to be expanded in order to encompass traditional audio understanding with that of IP.

One way in which the mix of IT and broadcast is being bought together is through collaborations in technology. The partnership between Net Insight and Calrec at this year’s IBC show was highlighted as an example. The pair attempted to simplify the challenges the broadcast industry faces in deploying remote live productions. This was achieved by integrating Net Insight’s Nimbra platform with Calrec’s RP1 Remote Production unit to provide support with a full audio remote production solution that offers simple connectivity, quality assured transport, and precise control of audio mixes from any location. The versatility of the combined solution means productions can connect via analogue, AES, MADI, SDI, and the latest AoIP solutions from AES67, and SMPTE 2022.

Danielson stated: “Net Insight is transporting bits, whereas Calrec comes from the audio side, so it’s very natural for us to do a collaboration together and join forces.”