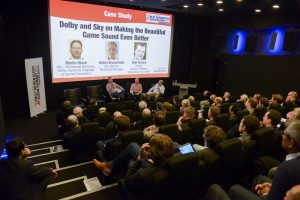 In early August Sky announced that it would be implementing Dolby Atmos in time for the 2017/18 English Premier League season, allowing customers of its premium Sky Q service to enjoy all matches in 4K UHD with Dolby Atmos. It was an ambitious project that heralded significant challenges both for Sky’s own team and that of OB service provider partner NEP, and many of these were explored in a special case study devised for SVG Europe and Dolby’s Next Generation Audio summit on 9 November.

For this session, Dolby Senior Product Marketing Manager Rob France interviewed Martin Black, Sky – Broadcast Services, Senior Systems Engineer and Sound Consultant, Robin Broomfield, Sky Sports, Technical Manager, and – from his seat in the audience! – NEP UK Head of Sound Paul Fournier. During a fascinating session, they discussed all of the key steps taken ahead of the first match featuring the new production – Arsenal vs Leicester on 11 August – as well as the opportunities for further refinement in the months ahead.

As Broomfield recalled, one of the keys to unlocking the Dolby Atmos workflow was recognising that the existing 5.1 mix “had to stay at least as good as it was, or be even better, when undertaken concurrently [with the Dolby Atmos mix].” The engineers involved in the production needed to be “confident to do the Atmos mix knowing the 5.1 was good, and that requires constant monitoring.”

In terms of audio capture at EPL venues the specification continues to revolve around the SoundField mics that Sky has long used for 5.1. “We chose the SoundField two-dimensional mics as the core 5.1 immersive element largely because of the fact that using B-Format configuration results in a very phase-coherent signal, so your downsides are more likely to be [related to ensuring] a sustainable and safe balance,” said Black. “Therefore we looked at what we could do with the same technology to create the immersive side as well, and ultimately we were able to use the B-Format signals to create two [additional] outputs.” These were taken from the SoundField decoders “to create the immersive height elements with that phase coherence”.

Hence in terms of “on the ground activity we didn’t do anything dramatic. We already had potential for interactivity in terms of microphones over goals and so on; they were all part of the microphone plan before this.”

But as might be expected, rather more work was required “to integrate [Dolby Atmos] into the truck in terms of the extra channels and mixing requirement, and the experience of people to be able to add this [element into the production].” And as Black noted, at such a formative stage in the general adoption of Dolby Atmos for sports broadcasting, it is definitely a question of “experience more than training as no one knows more than anyone else really!”

Integral to the delivery of the Dolby Atmos production is Dolby’s ED2 technology, which enables object-based audio to be carried along within the audio. The ED2 stream can then be converted into a number of different audio outputs – as defined by the original creator of the content – and carried through the metadata.

In the case of the Sky workflow, the Atmos mix is transcoded to Dolby Digital Plus before being delivered to the set top box. Meanwhile, the Sky audio team continues to provide separate stereo and 5.1 mixes out of the truck which are embedded along with the ED2 streams back to Sky MCR.

“A lot of pieces of technology as well as our engineering skills were being tested right through the signal chain,” remarked Black of the intense preparatory period that preceded the first EPL match of the season. But ultimately everything proceeded as smoothly as could reasonably be expected, and Black confirmed that he was “very pleasantly surprised by how effective” the end-result turned out to be.

Subsequent to showing NGA Summit delegates some footage of an EPL match mixed in Dolby Atmos, Broomfield, Black and France pondered the steps that can be taken in the coming months to further refine the existing workflow.

Broomfield spoke of plans for the Sky team to “sit down at some point in November” to reflect on the progress made to date, although he doesn’t anticipate “much radical change at this stage. What we are doing [already] is good and immersive.” And over time he has come to appreciate the immersive effect himself during time spent in the truck. “I am not a sound guy – I come from the other end of the truck – but I would sit in the middle of the sound area and think [the immersive mix] sounded OK – but when they switched back to 5.1 [the difference become strikingly apparent].”

Black added that one of the major priorities has been to develop “a house style” for Dolby Atmos and that this will continue to be finessed in the month ahead. “As Robin says, it’s ‘evolution not revolution… it’s very much a case of honing what we set out to do.”

One specific aspect that will continue to be developed is the integration of the venue PA sound “in the middle of the height aspects” within the Dolby atmos mix. Attempting to incorporate it into a standard mix “could interfere with intelligibility”, but with 3D and spatial separation it is less of an issue.

Broomfield added that the team will continue to review the placement of mics in some stadiums as well as access to the PA feeds and “other elements. We will keeping on looking at it to further hone the end-result.”

And of course, this ongoing work will also benefit the possible application of Dolby Atmos to other sports in the future. “We will look at other sports and I am sure there will be exciting opportunities,” said Black, who identified F1, in particular, as having “lots of scope” for immersive mixes.

At this point in the conversation NEP’s Paul Fournier was invited to offer his observations from the audience. As he recalled, “it happened quite quickly. When Sky went ahead with UHD we knew in the background that Atmos was on the horizon, but we did not expect it [to be added after year one of UHD].” So the team soon found itself testing equipped loaned from Dolby, and given that there was only a limited amount available “there was a lot of moving around from truck to truck, [then when that process was concluded] we started ordering kit.”

The need to feed the Dolby DP590 Professional Reference Decoders with MADI streams called for the quick turnaround of some bespoke MADI cards for the mixing desks. And it is the console component of the workflow that Fournier highlights as a target for future improvement.

“On the console side what we have now is not a bodge, but neither is 100% what we would like,” admitted Fournier. “So for example we have faders for 5.1, but we don’t have an Atmos fader.” The reality is that “we will need to talk to manufacturers and work out what we really need” long-term.

Further reducing latency will continue to be a priority, whilst the team is also looking at additional monitoring tools, with Black noting that during the preparatory phase “there was a one-line error that took weeks to sort out”.

But all in all, the opening months of the Dolby Atmos Premier League production are regarded by the Sky team as being “extremely pleasing” and having further underlined the broadcaster’s innovations in sound as well as picture.