Across sport and entertainment Sky has been an enthusiastic and world-leading early adopter of immersive sound as it looks to complement 4K visuals with equally compelling audio content. In this panel at the Dolby Theatre, audio engineers and technical heads discussed the challenges of mixing different sports, as well as the overall production roadmap for immersive audio and the challenges that lie ahead in ensuring it reaches the widest possible audience. 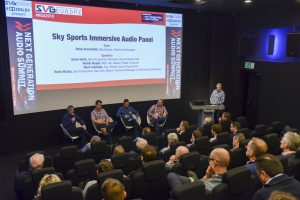 Broomfield led off the session with a look back at the timeline behind the introduction and roll out of Dolby Atmos at the broadcaster. “We started looking at Dolby Atmos in 2013 and 2014, and it was the next year that we started looking seriously at UHD, with a plan to launch services for the 2016-2017 Premiership football season. While we were testing the UHD it seemed a good idea to look at Atmos seriously as well.

“The tests were good and we were impressed, and it was the following year, August 2017, that we put Atmos into our then year-old UHD Premier League coverage. Having done that we’ve now rolled Atmos into other live Sky Sports coverage including boxing, rugby and darts – which will follow later in the year.

“We’ve also introduced Atmos in a lot of entertainment, live and post-produced, including the Isle of Wight Festival and our coverage of It’s Christmas Live From the Royal Albert Hall, as well as our own entertainment shows like Revolution and VOD coverage of movies and entertainment.”

Broomfield first invited his colleague Mark Ledwidge to share with the audience the biggest challenges the team has faced in working with Dolby Atmos.

“The biggest challenge was trying to work out what it was we wanted to deliver. What did we want to add to the 5.1 we already had? How did the technology work? What was an object? Are we just going to put effects up there above the listener? How are they going to listen – assuming no one at home was going to put speakers on the ceiling. Is there a sound bar that would be any good?

“Then we went into the trucks and immediately realised we couldn’t monitor Atmos – so we had to ask our friends at Calrec to help us out with that. And we had to sit down with Dolby to have them explain what Atmos does, and what we could do with it. This was a very new thing and we weren’t give any guidance,” said Ledwidge.

“We were lucky we could play around with it for a couple of months, where we could listen and figure out ‘that works, that doesn’t work’. And also to sit at home or in MCR and realise, ‘this doesn’t sound right, we’re losing things’.

“We did have a very, very short time to practice – thanks Robin!” Mark Ledwidge

“We did have a very, very short time to practice – thanks Robin! It was that period of ‘we might be introducing this, we’re not sure’ to ‘yes we’re going to do it. Go for it’.

“We then had three or four OB tests to work out could we do Atmos alongside 5.1 and stereo. Are they going to be separate mixes? Are we going to be able to down-mix – if there’s such a thing? The rendered output: is that going to render off our 5.1 or our stereo? A lot of challenges,” said Ledgwidge.

Robin Broomfield: From your perspective Nev, what other challenges on the OBs did we need to consider in preparation for the introduction of Dolby Atmos?

Neville Hooper: “It coincided with the new (Premier League) contract and the new truck-builds. Now while those trucks had already been built and were on the road, the fact that this had been mentioned and discussed gave us the opportunity to think about what we would do – even though at the time the technology did not exist. There were no production models of the Dolby coders.

“Through the trials we came up with a way of monitoring and discussed that with Calrec, who then came up with a way we could readily listen to our Atmos mix without having to balance two separate speaker outputs. Now it could be ganged together through software. But as we could factor it in from the beginning of the design we didn’t have to retro-fit the trucks.”

Aaron, you were responsible for getting the team together and making sure we had enough sound supervisors up to speed etc. What were the biggest challenges there?

Aaron Harte: “I would emphasise Mark’s point about the timeframe being very tight. Thanks Robin! Myself and Mark were really the only ones involved in the early testing, with invaluable help from Martin Black and other engineering colleagues.

“I would emphasise Mark’s point about the timeframe being very tight. Thanks Robin!” Aaron Harte

“With the UHD Premier League delivery there are various truck combinations. Every truck needs to generate a tailored feed. So we had to envisage how we could handle the new workflow of delivering Dolby Atmos in all these scenarios – when it was still such a new concept.

“Presentation, match, hub truck, slave, studio: we had to think through ‘where does Atmos come in and how do we implement it in each of these scenarios, maintaining consistency across all of them?’

“At the same time we could not get in the way of 5.1 and HD, which is the majority of takers. Production would not be happy with us saying ‘we’re distracted with Atmos and missed something on the 5.1’. It was quite a challenge trying to envisage how to implement it across all the truck set-ups.

“After some invaluable training with the legendary Mister Mick Dwyer, I was still concerned with how 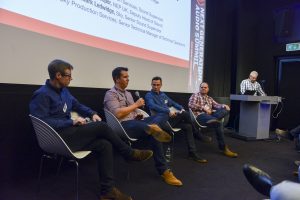 the hell we were going to derive the 5.1 and stereo. The concept of using the DP 590/591 rendering tool for the Atmos mix was so new, I wasn’t sure how the latency — although minimal — would affect us doing the live mix to air.

“It was such a new concept for everybody, especially considering the way Sky delivers Atmos, which is JOC or Joint Object Coding. The height content can’t be completely taken away from the down-mix. Should we include that height content in the 5.1 and the LTR versions?

“We did decide we had to deliver the Atmos mix in parallel with the existing mixes, so the 5.1 and stereo were not compromised at all. Otherwise there would have been a significant change to the way we delivered it and to the infrastructure at Sky – as well as being a fundamental change to the way we mix live sport.”

Kev your brief is much wider than sports, incorporating Sky’s entertainment production including post produced shows. What were the key differences in producing entertainment as opposed to sports in Dolby Atmos?

Kevin McCue: “We started on a bit of a different journey to the sports guys. We were really just thinking about post-produced Dolby Atmos. We retrofitted a dubbing theatre with Atmos speakers and really started off playing with some of the post production tools and producing some content in that environment.

“We went from small things like It’s Christmas Live From the Royal Albert Hall and the Queen’s Speech to doing bigger entertainment shows, figuring out the mic placement and coverage. All of the things we were trying to get from a post production environment became a lot more key, where your preconceptions about things like mic placement get blown out of the window.

“The bigger the venue you get into the less microphones you want because it all just starts to turn into an absolute mess! You throw up 100 mics and before you know it you’re in no man’s land…

“We were then faced with the challenge of, having made some of these big post produced shows for VOD we had to start bridging into the sports world, because our whole TX chain is built around live events. We had to bridge a post production workflow into a live workflow, and have a hybrid of tools.

“The Dolby toolset around live and that around post production are a million miles away from each other, bar the fact you’ve got some surround speakers and some high speakers – that’s where the relationship begins and ends. We had to work out internally with our tech guys how we could post produce content to play out on a live TX chain: that was one of the biggest learning experiences for us, figuring out how to make those two worlds work together.

“It really culminated this year with the Isle of Wight Festival, where we took everything we had learned from entertainment events and said ‘right, we’re going to try to do this live now’. The technical side was one thing: what we didn’t predict was how hard the sound supervisors would find it to mix a band in Dolby Atmos. 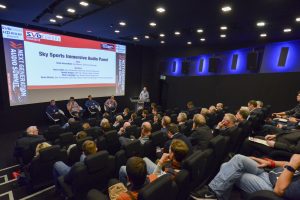 “In a festival environment you have a bit of a line check, you throw the faders up and try to get a mix together in the first track. Our mixers all found that once you have an element of height above you, nobody could EQ and get a mix together. They were getting a lot of spill coming down from above, hitting the desk and refracting straight into their face and they couldn’t EQ and compress anything.

“In a music environment it’s a whole different skill set in the way you monitor and pre-prepare, and where you put your speakers. As we started tilting the speakers back and away from the mixing desk, we had a much better time of it. That’s certainly one of the things we learned through the process.”

Mark what challenges lie ahead, as we move into rugby coverage with the Autumn International Series and then darts coming up as well?

“In a fixed stadium-sized area it can work very well; however where you’ve got miles and miles of track or open areas that you can’t control, what are you going to gain? I think with Atmos it’s all about that added value for the listener at home. It is subjective: is the person at home going to be listening on a sound bar? Are they going to be watching on their iPad? We’ve got to just do our best.”

Finally Nev, what has your team learned in terms of accommodating Dolby Atmos into everything else you do, and still being able to stick to your regular schedules every week?

Neville Hooper: “When we went from stereo to 5.1, I think we had about six months of actual trials before it went anywhere. This time around we had three or four trials and then it was straight into it.

“From a technical point of view it’s two more Dolby E streams within the video signal: so as long it’s all correctly timed in the right line, we are building on knowledge and technical skills we already had.

“Obviously there’s a bit more complexity with getting signals in and out of the desk, but now with the greater use of MADI — and being able to feed the encoders with MADI — it’s a lot easier to get more signals around. And as we’re already moving to a more computer-based and even IP-based workflow, we’re more comfortable than perhaps we would have been when we were doing the stereo to 5.1 transition.”