Next Generation Audio Summit: present and future of broadcast audio in focus at sell-out event 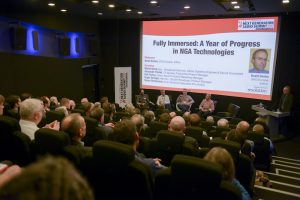 The latest edition of the Next Generation Audio Summit – which was organised by SVG Europe in conjunction with Dolby – played host to some dynamic debates about the current outlook for, and adoption of, immersive and object-based audio technologies. There was also a timely session about the state of play regarding IP-based workflows, as well as a detailed consideration of the possibilities heralded by remote production for streamlined workflows and increased cost-efficiency.

Of particular note were the case study involving Dolby, Sky and NEP that analysed the many technical challenges that had to be overcome prior to the implementation of Dolby Atmos production for this season’s Premier League coverage; an extended debate about the issues that have to be considered by broadcasters and OB providers before they take the ‘immersive route’; and a case study from Lawo looking at some typical user scenarios for remote production.

A capacity crowd also took advantage of the multiple networking opportunities and a screening of Kenneth Branagh’s new version of Murder on the Orient Express, presented in both Dolby Vision and Dolby Atmos.

Detailed reports of each key session will appear on the SVG Europe website in the coming days; the first report – about the Sky/Dolby case study – is already available to read here: https://www.svgeurope.org/blog/headlines/next-generation-audio-summit-inside-skys-implementation-of-dolby-atmos-for-the-latest-premier-league-season-coverage/.

David Davies, SVG Europe Editor, comments: “We were delighted by the response to the Next Generation Audio, which underlined our feeling that this is one of the most exciting periods in broadcast audio technology for many years. As well as Dolby, I would like to thank session sponsor Clear-Com and media partner Resolution Magazine. We are already talking with Dolby about a third event, so expect to be returning to Soho Square for the third Next Generation Audio Summit in November 2018.”