Looking to change the relationship between digital rights and fans, the NFL will allow fans to watch local and national games on their mobile devices regardless of carrier and without the need to authenticate.

“We’re interested in the same thing [former NFL Commissioner] Pete Rozelle was interested in in 1965,” says Brian Rolapp, president/CEO, NFL Network, and EVP, NFL Media. “Then, it was to reach as many households and fans as possible.” 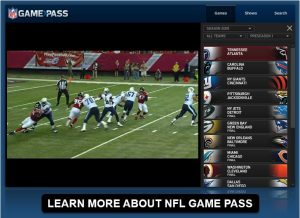 The NFL’s digital subscription offerings, such as GamePass, will be complemented with greater free access to NFL games

The move marks a big change for a top-level sports league and also will give the NFL plenty of information about digital consumption. Fans will be able to access the local in-market games as well as nationally broadcast games for free via either the NFL or Yahoo app. Historically, streaming of any NFL game on a smartphone, even when authenticated as a cable subscriber, has been limited to Verizon customers.

“We’ll learn a lot about how much incremental consumption there is, as well as the demographics and whether or not it drives them back to TV,” Rolapp observes. “A lot of people say their first choice is to watch a game on TV, but that is not always an option. For example, with Twitter, we found that a lot of people start to watch the game on Twitter but then get back to watching it on TV, especially for West Coast viewers during the 8:30 games [on the East Coast].”

Says NFL COO Maryann Turcke, “I really think that having the full market of wireless carriers able to stream our games is going to be a game-changer, and it is helping us get to that younger audience, which is, of course, where the future is.”

Commercials that run on the national network that has the rights to the game will pass through to viewers, providing incremental eyeballs for ratings calculations. Local ads, however, will be sold by Yahoo Sports, replacing local spots within the NFL broadcast. The exception will be the Thursday Night Football games that stream on Amazon Prime: Amazon will handle ad insertion for digital viewers tuning in via Amazon Prime.

“Amazon is still early in the ad business and concentrating on the consumer experience and content,” says Rolapp.

The move will provide the league and potential rights partners plenty of useful information in advance of the next round of NFL rights negotiations. Most important, it will give the league a true sense of the digital audience; previously, requirements like the need to authenticate or be a Verizon subscriber have been gating factors.

“Logging in is complicated,” Rolapp points out. “There are plenty of people who don’t know how to do that or don’t subscribe, and that number is going up every year.”