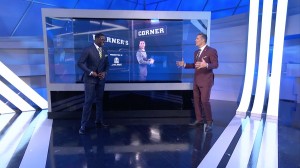 Just in time to kick off the regular season, NFL Network transformed the look and capabilities of its NFL GameDay studio with the addition of transparent video displays. The Planar LookThru OLED monitors appear to be glass but can take in regular video sources through HDMI or DisplayPort inputs and light up with content.

Taking cues from NFL stadiums under construction in Inglewood, CA, and Atlanta, NFL Network looked for a way to deviate from traditional, boxy displays toward more modern, sleek displays that fit seamlessly into the architecture of the space. The intention, says Rick Qualliotine, VP, emerging production platforms and systems, NFL Media, was to “peek around the corner,” not only in an architectural sense — the talent can walk around the monitors — but in a technological, forward-looking sense as well. 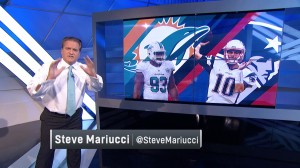 When not displaying content, the Planar LookThru OLED monitor is clear

“This is the continuation of a long and amazing history that starts off 60 years ago with NFL Films using cutting-edge technology and the best craftspeople to produce television broadcasts,” he says. “We feel like this is a great continuation of the work that started there with trying to use technology in a way to connect with our fans and offer them a chance to experience even more of what they love about the game.”

Launched at NAB 2016, the Planar LookThru monitors measure 55 in. diagonal and feature 1920×1080 Full HD resolution and a 16:9 aspect ratio. The monitors comprise two panels of glass with a layer of silicon in between, resulting in monitors that look like windows when no video is playing. (In fact, the monitors are designed so that any black or dark portions of video also appear clear, giving the network added creative potential.) NFL Network purchased the company’s first LookThru monitors at the trade show; according to Qualliotine, no other television studio has the technology. 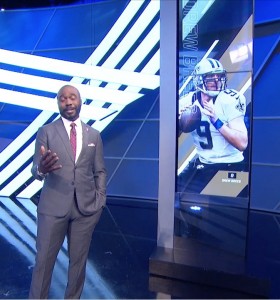 others, NFL Network installed four monitors in a tiled two-by-two configuration in the middle of the set and stacked another three monitors to serve as a vertical screen. Depending on how they are configured, the monitors can be tied together to show a single video feed or separated to show multiple feeds. The monitors debuted on Sept. 6 during NFL GameDay Season Preview, and NFL Network will continue to experiment with the technology throughout the regular season.

“The interesting thing that we’re discovering as we start to play with them is that we have to think of them in terms of being not necessarily the place that you would go to look at a traditional image; we have other monitors on the set for that,” says Qualliotine. “It’s a lot more about creating interesting scenic space and also opportunities to visually express information in a new way.”

The monitors do not require any backlight or enclosure, nor do they require additional backend production technology other than NFL Network’s existing Vizrt system.

“As far as the cables and the connectors and how you run them, there’s nothing that’s different [from traditional monitors,] so that part was tremendously appealing,” says Qualliotine, “ We could go state-of-the-art and get something that nobody else has but not have to rewire our entire studio.”