The National Film and Television School (NFTS) has just concluded its first run of the Live Sports Production with Live TV Simulator short course in association with HBS Broadcast Academy. The Live Sports Production programme, which is designed to benefit the directors, replay operators and producers in production of a sports event, has been called “light years away” from traditional methods of teaching by instructor, John Watts, OB director and instructor of this NFTS course. 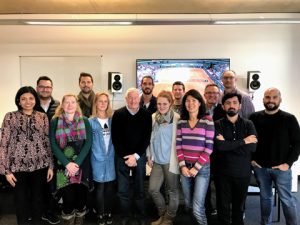 Using the brand new Live TV Simulator the participants practise the art of storytelling and learn from various international broadcasting philosophies to broadcast a live event. The theoretical and practical course aims to encourage and develop existing expertise and creativity of participants.

Students get to work with football footage controlling 12 cameras, tennis using five cameras and basketball using eight cameras over the week-long course. Watts stated: “That’s three different specs and sports, all with different styles of coverage, like proper telly. We also have EVS’, so they can get replay from seven angles.”

On how important the use of sports footage in a realistic environment is to aiding learning on this course, Watts commented: “In the case of this course, it’s the first time using real world sports events has been used to create training environment simulations. You can go through a Power Point and talk to people, but on this course they can actually use the technology and see the problems that real director experience across three real sports.”

The Live Sports Production programme has succeeded in attracting three female candidates to its first run, including Jessica Sheehan, freelance coordinator and producer, who is on the course through a Creative Skillset Film Skills Fund bursary.

Female directors are few and far between, and NFTS is keen to encourage more women to apply for this course to help change that imbalance. Sheehan commented: “I am 36 and have worked in this area for over 10 years. I’ve been bouncing around different sports and roles, but directing is bloody hard to get into; it never opens up to people with less experience.

“At the moment I go around the world with indoor volley ball – I coordinate with HBS on certain championships – and in Bulgaria there is one female director I work with. Everywhere else, Mexico, China, you name it, they’re all men,” Sheehan continued.

On what she thinks of the course, Sheehan added: “This course is great because you get the knowledge. John talks everyone through it; it’s like being in a live OB. You get more confidence in certain things, so if an opportunity comes up to direct, you aren’t going to be worried about your fingers, you’ll be thinking editorially and hopefully will get another job off of it. I really hope this comes to something.”

As to what Watts thinks of this course, he said: “You can talk about styles to do things and illustrate that with video, but here all the things you talk about you can actually experience. You can see what the students want to do; it’s a different level of teaching, and the improvement you see [in students] is amazing. This is light years away from just talking about it on Power Point.”

Watts concluded: “This course gives students’ confidence. Half the time, the job of director is all about confidence. Also, while some people might want to be a director, they might do the course and realise they don’t; that they’d rather be a producer. It gives you an insight into the role so you have some knowledge of what it’s really like.”

The Live TV Simulator has become an integrated training facility built using the latest in live production equipment. It is easy to setup and configure according to the different training scenarios This includes live video servers, enabling up to 16 ISO camera feeds in High Definition 1080i format for ingest/playout, instant replay and slow motion tools and a live video switcher that can be used by multiple trainees simultaneously.

The participants are able to review and analyse their performance immediately during the training, they retain a copy of content created as a personal reference material after the training. The simulator is a cost effective solution for training as it recreates the OB environment, replaces expensive production infrastructures (OB van, fly-away kit or studio gallery)  and provides ‘free’ technical crews (cameramen, vision engineers, assistants, technicians, cable pullers, etc.)

CreativeSkillset bursaries for up to £1000 are available to people from diverse/underrepresented groups.

Additionally, the NFTS Sports Production Diploma is actively seeking applications, particularly from women. It is taught by Tom Lewis who has over 30 years’ experience in sports television, and sports producer, Chris Downham (recent credits include series producer of BBC Football League Show, senior Ffatures producer at 2014 FIFA World Cup in Brazil and senior producer of UEFA Euro 2016 Qualifiers Highlights). There is an open day for the course on the 24 April and more information can be found at www.nfts.co.uk/sports.