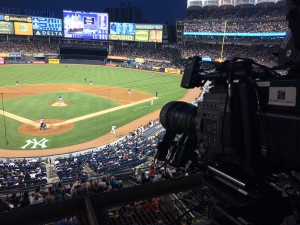 One of two Ikegami 8K cameras used at Yankee Stadium

NHK’s Super Hi-Vision format featuring 8K video and 22.2-multichannel audio has made its live-sports debut in the US. The Japanese broadcaster produced three Yankees-Mariners games and presented them in 8K Super Hi-Vision (SHV) at a viewing suite inside Yankee Stadium. “We have done a lot of shows now, so everyone is getting better. And this is a great to chance for us to promote 8K in New York,” says Hiroyuki Nishizawa, director general, engineering/executive chief engineer, NHK Cosmomedia America. “The [MLB] style of play is different from Japan so it is a great opportunity to test. Afterwards, we will evaluate how we captured the game and the players and how we can improve with additional cameras and audio.”

After 8K SHV production tests at the FIFA Women’s World Cup and Wimbledon earlier this summer, NHK set its sights on Major League Baseball with the three-game series. The broadcaster had previously performed just a single test during a Nippon Professional Baseball game in Japan.

The production marks yet another step in NHK’s ambitious government-mandated timeline for the 33-megapixel format (four times the resolution of 4K and 16 times that of standard HD), which includes 8K satellite-broadcasting tests next year and the launch of an 8K satellite-broadcasting service in 2018, in time for what is expected to be 8K SHV’s coming-out party at the 2020 Tokyo Olympics.

Although NHK continues to experiment with higher frame rates up to 120 fps, these games were produced in 60p, according to Tsuyoshi Hinata, senior manager, 8K SHV technical production development.

A pair of NHK production trailers were on hand at the Yankee Stadium truck compound: one for the video portion and an entirely separate unit to mix the audio. The same units handled NHK’s 8K SHV production at the FIFA Women’s World Cup in Canada, as well as a variety of other tests in recent years (the Wimbledon production was located in an established control room at All England Lawn Tennis and Croquet Club).

Although the switcher may seem scaled-down, Nishizawa explains that 8K requires the director to cut less and rely more on hi-res wide shots of the action. “Generally speaking, we don’t have to cut as many times or have lots of tight shots [as in HD],” he says. “But, for the [baseball] viewers, we may need more of those shots. This is why we [are holding] the trial.”

The 8K SHV programme was delivered via fibre to a viewing suite and to a production room near the compound, put through an Astrodesign SSD recorder, and displayed on 85-in. direct-view LCD 8K television sets. A Panasonic P2 solid-state AVC-Intra recorder with 16 P2 cards recorded the content for postproduction purposes.

With a specifically customized Lawo mc266 console for 22.2-multichannel in the audio truck, NHK’s audio production uses a monitor to create a three-dimensional representation of the audio levels to help mix the best possible show. 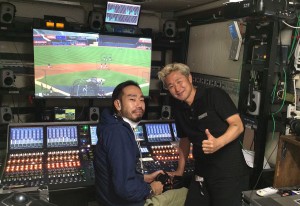 NHK deployed whopping 60 crowd mics (mostly Sennheiser and a few DPA surround-sound mics), a variety of effects mics on the field (including at home, first base, and third base and in the bullpen), and various shotgun, cardioid, and omnidirectional mics throughout Yankee Stadium. NHK’s goal was to deploy as many microphones as possible in order to experiment and find the best audio production strategies for baseball. “We are testing as much as possible since this is the first time we are recording an MLB show,” says Kazutaka Noda, technical coordinator/audio engineer for the 8K SHV production, NHK Cosmomedia America. “We never really had an ideal location [for mic placement], but, [at Yankee Stadium], it’s quite good. If we have the right microphone positions and right number of microphones, it makes it easier to mix.”

Previously, NHK used a massive sphere-like 22.2-multichannel one-point microphone system, lovingly dubbed “the big ball.” The ball includes 16-24 microphones, depending on the event, that pick up audio from various points throughout the venue and feed back to the truck in order to mix a single, unified audio show. However, the unit must be placed perfectly in the center of a venue and also has to contend with excessive PA sound.

“We are not using the big ball because it picks up so much PA,” says Noda. “Ideally, we would hang that big ball right above the middle of the field or behind home plate, but we cannot do that here. If we got the ideal location for that microphone, it would be much easier for mixing since we can create the entire atmosphere with just one piece, but that is very difficult to find the perfect [placement] for. We will continue to use the big ball when possible. We are still figuring out what the best way is to do this.”

With the deadlines for satellite broadcasting tests in 2016 and the launch of a full service in 2018 looming, NHK always has one eye on the future when it comes to 8K SHV. In that vein, the broadcaster will roll out two sets of 8K SHV trucks this fall with the intention of producing more events both in Japan and globally. The current trucks are on their way back to Japan, where they will be retired and gutted for equipment. These trucks will be on hand to produce 8K SHV shows at Super Bowl 50 at the San Francisco 49ers’ Levi’s Stadium in February and the 2016 Olympics in Rio (where NHK plans to test satellite broadcasts).

NHK is also looking to replace many of the upconverted 2K and 4K elements currently used in the workflow (including graphics, monitors, all cameras).

Transmission and compression techniques also continue to evolve. For the FIFA Women’s World Cup in Vancouver, NHK used two 140-Mbps transport streams to deliver H.264 signals to viewing locations in New York City and Los Angeles using Fujitsu encoders/decoders. NHK continues to experiment with the potential of HEVC/H.265 compression for both contribution and distribution to the home as well.