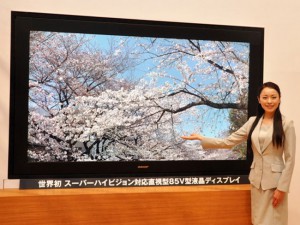 The SMPTE Forum on Emerging Media Technologies provided an update on Ultra HD plans for the London Olympics this summer as NHK, the BBC, and Olympic Broadcast Services (OBS) will demonstrate what promises to be the broadcast buzz in 2020: Ultra HD, with 33 million pixels and 22.2 Surround Sound channels. The Ultra-HD demonstration of the London Olympics, according to Dr. Yoshiaki Shishikui, head of NHK’s Advanced Television Systems Research Division, will deliver Ultra HD signals via from five events plus the opening and closing ceremonies via satellite to theatres in six cities around the globe (London, Glasgow and Bradford in the UK, Washington, DC in the US, and Tokyo and Osaka in Japanese).

The viewing experience for the Olympics will include theater environments as well as a prototype 145-inch Ultra HD plasma display panel that will be located in a showcase at the International Broadcast Center in London.

Dr. Shishikui says that in 2020 NHK expects to offer a satellite service in the 21 GHz band that can provide Ultra HD images over the air. As for the technology roadmap, Dr. Shishikui says that in the next five years portable cameras, remote-controlled cameras, and compact recorders, along with card-based editing systems, will all be available. During years six to 10 the focus will be on the development of additional editing systems, master monitor formats, and a 22.2-channel Surround Sound production system.

“After 15 years we expect to develop the same level of usability as current HD devices but will still need large-capacity archive systems and higher-sensitivity cameras,” he adds.

But this summer’s Olympic coverage will obviously be on the cutting edge of technology. The core piece of acquisition gear will be two sets of three 20 kg cameras that have four 1.25-inch CMOS sensors that have 8 million pixels each (two are for green and one for red and blue).

Recording will be done with 32 Panasonic P2-based 64 GB cards, providing two hours of recording. The OB van will also include an 8-channel vision mixer, an 8×8 router, slow-motion playback capabilities, an HD up converter, and an audio mixing board that can output 22.2 channels.