A typical NASCAR racer brings about 400 horsepower to the track. A typical NHRA top-fuel dragster comes in at about 11,000 horsepower. The differential in their sonic impact is just about as vast.

“When you stand next to one of them at the start line at a track, the sound just goes through you,” says Mike Rokosa, the National Hot Rod Association’s technology executive. “Not only do you hear this incredible sound, you actually feel it in your bones.” Thus, he adds, pairing the NHRA and Dolby’s immersive Atmos audio format made tremendous sense.

Production trials with Dolby Atmos at NHRA events began last year, culminated at the NHRA Nationals April 6-8 in Las Vegas, and may continue through the NHRA season, which runs through November. According to Rokosa, carriage and STB technical details are being worked out with several major MPVDs. However, no decision has been made yet as to when they may go to air with a Dolby Atmos-encoded broadcast.

The first live-produced Dolby Atmos event in the U.S. was the 2018 Winter Olympics, available to Comcast and DirecTV subscribers, and Atmos is being used in the UK by Sky Sports and BT Sport for Premier League and Championship League soccer on their 4K channels.

Much of the past year, Rokosa says, has been spent developing techniques for implementing Dolby Atmos. NHRA decided to test out the format after a demonstration using mixes that Dolby engineers had done of audio stems taken from races. The decision followed the organization’s leap from stereo broadcasting to 5.1 surround in less than two years, after the NHRA shifted its shows from ESPN to Fox Sports.

Rokosa — who previously had helped launch NBA TV, shepherded the Q5X PlayerMic into the league, and supervising the first broadcast use of surround sound at Super Bowl XXI in 1987 — says that most of the startup effort will be invested in adapting mix techniques for Dolby Atmos. The effort uses a pair of Game Creek remote-production trucks, with effects mixer Rusty Roark and A1 Josh Daniels.

“Most of the work falls on Rusty’s shoulders,” notes Rokosa. “The challenge is how to take what can be done in postproduction and make it work in a live-broadcast environment. This was completely new ground.” 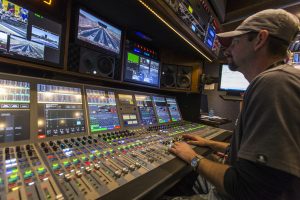 The process involved a borrowed Calrec Artemis console aboard the B unit for sound effects, replacing a Calrec Brio console; a Calrec Summa desk was permanently installed for the Las Vegas races.

What didn’t change were the existing microphones or their placements. “The way sound is captured for racing remains perfectly valid,” Rokosa explains. “It’s the way they’re mixed that we had to change.”

Nonetheless, during the test, one or two microphones were damaged through overpressure per race, where sound levels routinely reach 160 dB. In continued testing in subsequent races in Houston and elsewhere, several new types of microphones will be evaluated, because the Dolby Atmos sound field lets the broadcast audio become even more granular. One type will also include the first use of a multi-element dedicated surround microphone, which will be placed 60 ft. ahead of the starting line.

Rokosa says development of Dolby Atmos mixing techniques requires the cooperation of camera operators and the show directors, as well as the audio mixers.

“Unlike before, where the audio was just catching up to and following the shots, we are setting shots up ahead of time for the purpose of moving sound with the shot,” he explains. “Specifically, shots at the start line with handhelds and the jib [cameras], we began to correlate both video and audio together as part of the director’s call.”

The audio starts with a 5.1 surround bed, upon which key audio elements can be moved up and down, exploiting the format’s height speakers. This is done using dual 5.1 buses on the console, one bus for upper sound sources and one for lower, and panning between them manually using the console faders.

“Imagine a jib camera sweeping upwards across the top of a car, then down the other side. We’re moving the audio to match that arc,” Rokosa says. “It took a lot of practice, over the course of five or six events, to get those moves to be smooth and fluid.” 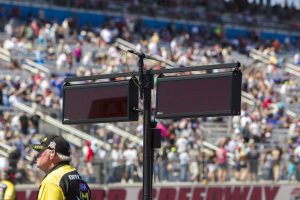 Microphone placement between cars at the start of the race

The NHRA is looking forward to having Dolby Atmos represent its trackside experience for home viewers, he says, adding that even homes without height speakers will hear improved audio, because the format has helped raise audio quality across the board.

“One thing we’ve found since we began this is that the fold-down of our 5.1-surround and stereo mixes has gotten markedly better,” he notes. “It’s forced us to look at things differently and to become more aggressive with the mixes, especially in the LFE area. We’re also using the enhanced audio to press our announcers more, too. The whole sound package is better. Sound is a huge part of what we are, and this is now putting viewers inches away from the cars.”