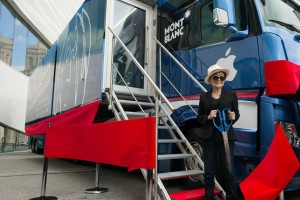 Launched 16 years ago, the original John Lennon Educational Tour Bus has given thousands of young people across the US the opportunity to get hands-on with the latest AV gear and create their own video, broadcast and music projects. Now it has a European counterpart, made possible through the generosity of some of the biggest names in professional AV – among them Avid, NewTek, Sony and Vitec.

Accompanied by considerable media fanfare, the vehicle was officially unveiled during an event at Museum of Liverpool on 8 May, attended by Lennon’s artistic collaborator and widow, Yoko Ono Lennon.

“The educational bus is a huge success in the USA,” said Ono Lennon, “but John would have been extra-thrilled that it is now launching in Europe, starting in Liverpool, his home town.”

Available for request visits to schools, colleges and trade shows, the new vehicle packs a lot of high-end possibilities onto a 12-metre-long Mercedes-Benz chassis. Not only there are extensive HD video facilities, there are two music recording studios and an acoustic isolation room. In addition, the ‘Peace Deck’ roof-top terrace and pop-outs can accommodate performances and the creation of interview and other online content. All artistic projects created on the bus will be available for viewing on the www.lennonbus.org website. 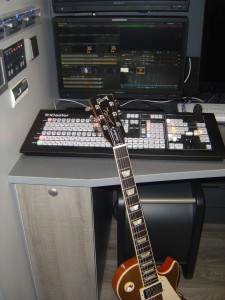 NewTek (TriCaster 855) and Gibson are among the star suppliers [Image: SVG]

Meanwhile, a 24-channel, multi-camera TriCaster 855 production system gives the user a capacity for up to eight cameras, plus five digital media players for video clips, graphics and titles, and two network channels for sharing video and audio from the bus’s Mac devices.

Audio-Technica microphones and headphones, an SSL mixer and mic-pres, and Clear-Com comms systems are also part of the spec, along with MI gear from Gibson, Epiphone and Roland.

After its high-profile launch in Lennon’s hometown, the Lennon Educational Tour Bus makes its next scheduled stop at the Yoko Ono Lennon-curated Meltdown Festival at the Southbank Centre, beginning on 14 June.

“I’m so thrilled that the Educational Tour Bus will be situated at Meltdown,” said Ono Lennon. “All kids who are interested in making music and learning how to use instruments in the recording studio should come and make use of this freebie!”