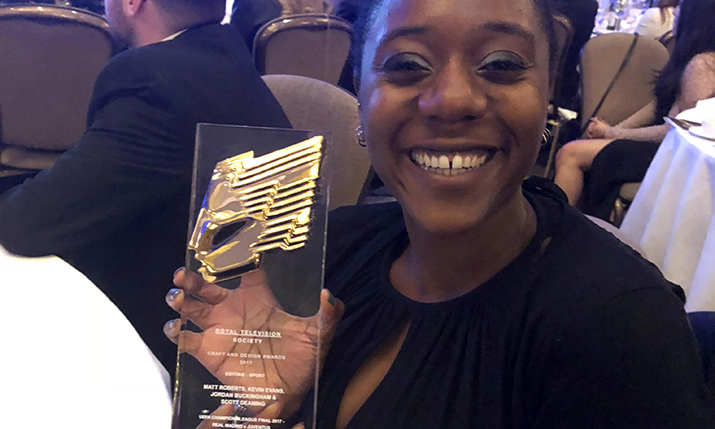 “From that first experience, I was hooked. I knew TV broadcasting was where I wanted to be,” continues Davids. “I didn’t go to uni or take any TV-related course at college. I started my TV career at the bottom as a runner and worked my way up.”

Working up the ladder

“After my first running gig, I applied to be a production secretary, working on various non-sport related productions to get my foot in the door. I worked my way up the ladder, becoming a production assistant then a co-ord.

“My big sports TV break came when I was offered a role on the 2010 World Cup in South Africa as a production co-ord,” Davids goes on. “After spending eight weeks working on the World Cup, which I loved, I was desperate to continue working on football. I was also fortunate to get the opportunity to work on the 2012 Euros.”

“Working on a World Cup and the Euros were both amazing experiences, but working on the Champions League final, being part of the planning and set up, made it a different experience which I’ll always remember”

Following the World Cup, Davids moved to the football department at IMG, working on its ESPN contract. She says: “This was my dream job working on the Premier League, Scottish Premier League, Women’s Super League and FA Cup. As we were such a small team, I learnt so much and got fantastic opportunities to progress my career.

“I started as a co-ord and by the time the contract ended I was a junior PM. When the ESPN contact ended, I moved to Sunset+Vine as a PM and continued to work on the Premier League and FA Cup for BT Sport. When BT Sport won the rights for the UEFA Champions League, I knew that was where my next adventure would be.”

And so Davids set off for pastures new at BT Sport. She adds: “When BT Sport won the rights for the Champions League, I knew I wanted to work on it and fortunately I got that opportunity. I loved working on football and the Champions League is the holy grail of football tournaments.

“I learnt a lot as the Champions League is like nothing I have ever worked on, due to the size and scale of the matches. Working with international broadcasters is the hardest thing about it, but it’s worth it, and I have always enjoyed being on an outside broadcast truck,” she notes.

Over the last two years Davids’ role has changed and moved forward. She notes: “The role has become more technical with the new remote workflow due to COVID-19. The changing workflow means I am continually learning new skills and developing my knowledge.”

UHD HDR production has been an exciting area for Davids to get involved in at BT Sport over recent years. She says: “Being involved on working for a company that were one of the first productions to produce UHD HDR programming is very exciting!”

The variety of working on live sports continues to draw Davids to a career in live sport. She says: “I like that no two games are the same.”

Finally, to other women looking at moving into sports broadcasting behind the camera, Davids says: “My advice would be, that you do not have to go to university to have a career in sports broadcasting. If you work hard and put in the hours, you can succeed in sports TV.”