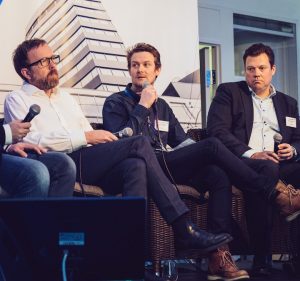 The SVG Europe/NCE Media Nordic Summit, held in Bergen, Norway, on 16 January, gave attendees a chance to hear from top broadcasters in the Scandinavia region during a far-reaching panel session moderated by Helge Høibraathen, CEO of Vimond.

Marius Bjerke, product director at TV2 Sumo – a streaming service owned by the TV2 Group that is the second biggest OTT streaming service in Norway (behind Netflix) – said that sports rights are important and are also becoming more competitive given the entry of global sports brands. But the advantage the national rights holders bring to the equation is a bigger commitment to providing more engaging local perspectives.

“Our success around the Premier League is because strong journalists are part of the desk,” he said. Global entities typically are not capable of providing that same level of engagement.

Working with NRK, the national Norwegian broadcaster, and sharing the rights to Champions League, is one way that national broadcasters can collaborate to fend off global broadcasters.

“Especially on rights the global actors are interested in smaller markets, so you might see consolidation of traditional broadcasters to build businesses together,” he adds. “Instead of fighting each other there is a fight against the global ones.”

NRK’s Eric Olund also sees rights as a huge challenge as prices not only vary a lot, there is also a need to snag rights for the major sports.

“If we are only doing the niche and small stuff then people will forget us and if we become uninteresting then we lose the [broadcast] licence. So that is a challenge as we have seen rights get too expensive.”

As for OTT viewing, Bjerke sees not only growth in viewing rates but also retention rates. There are five key Norwegian OTT services that are available, and he sees room for all of them. “Going forward you have to make personal experiences for the consumer, but also keep the traditional models where they pay a subscription to us,” he said. “And for that direct contact with the consumer is important.”

One way to do that is via an organisation that has a philosophy built around small teams that can execute fast with a combination of technology and analysts that can hit the market in a way that better addresses market needs.

“The cost of distributing high-quality video services is rapidly increasing and working together is an advantage for broadcasters in the Nordics,” he said. “The equation of growing subscriptions and growing users means a bigger total cost.”

Olund agrees that bandwidth for an OTT service and costs associated with delivery are a big challenge.

One million people wanting to watch an event live via OTT means higher distribution costs and that is even more so if it is done in 4K. “Sports is an area where we have to watch the cost of distribution, especially for live events,” he said.

OTT is just as important to a public broadcaster as it is to others as the goal is to deliver content to wherever the consumer might be. “If they want something on OTT then we have to be there,” saidOlund. “And viewers want a lot of sports live.”

Even though Norway’s internet infrastructure is robust, Bjerke observes that issues can arise as the ISPs can overbook their networks. “You can see some issues, especially when Liverpool is playing Manchester United and you are trying to deliver it at 720p,” he said. “But we are pushing out 4K and getting ready for that market.”

The interest in 4K is coupled with one in HDR, although according to Olund NRK sees more potential in HDR. Risto Koivula, COO/CTO of Finland’s MTV Oy, a commercial broadcaster based in Helsinki, agrees.

“HDR is more relevant at the moment and mobile viewing is growing so we will do other stuff before we will do 4K,” he remarked.

MTV Oy has three ad-based channels and 10 pay TV channels with sports being a key offering. “Sports is a key thing in all of our platforms with F1 and Nordic skiing popular in many areas,” he said.

MTV Oy is no different when it comes to using OTT to serve viewers and subscribers in new ways. Koivula says that MTV Oy is experimenting with delivering several streams of content for an event at the same time and also how to deliver more stats and twitter feeds to mobile devices.

“The next three years will be interesting to see how we engage in all platforms,” he said. “The consumer is the winner as their expectations have been growing so fast and we will continue to evolve and offer even better services.”

One challenge facing everyone is developing a three or four-year vision of where an organisation wants to go. “With incremental work you can grow in the wrong direction,” he said. “So, keeping up with the old and building new services is challenging at the moment.”