In Bergen Hellmuth took part in a one-on-one interview with Sports Video Group Editorial Director Ken Kerschbaumer, discussing technological trends and changing media consumption patterns around one of the world’s most successful and forward-looking sports leagues, the NBA.

Hellmuth began by outlining how a typical professional basketball game in the US has evolved to become a sophisticated entertainment experience that involves the teams, venues, broadcasters, the league – and most importantly, the fans. Watching not just in the stadium, but on TV and, increasingly, on mobile devices around the world.

“The NBA is about a continuous entertainment experience for fans, from the time they arrive to the time they leave. You don’t need to be a hard-core NBA fan to go to a venue and thoroughly enjoy the experience. We have music, contests, dancers, and mascots doing crazy things!

“We actually have a central unit at the NBA that shares best practices – the best acts, the best music. Those best things that are done in one venue are handed off to other venues. It’s a huge focus,” said Hellmuth.

“Now, with the product we have internationally, League Pass Broadband International — which is growing at a rate of 25% a year – we leave the fans in the venues. So it’s Netflix for basketball. There are no commercials. You stay and you get to see the opening, the entertainment, the interstitials, the huddles, the closing – or else we fill it with highlights germane to that night, whether video or tweets or other social media, so that fans around the world get the in-venue experience,” he said.

“The NBA, famously, has allowed camera people closer to the field of play than other sports. We have them right underneath the basket and right in the corners and we have the crowd in close. Everything is right there.

“We actually set up our venues with very stringent rules about where the camera positions can be, and the lighting. We also have a great deal of focus on the proximity of the fans, and the fans’ ability to generate noise.

“All of our arenas do double or triple duty: they do concerts, and earn a lot of revenue from concerts. 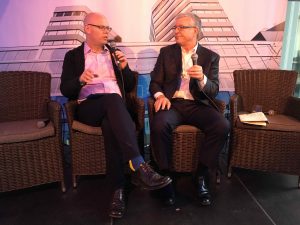 And they tend to want to set up their buildings for concerts, which are sound deadened. We obviously want lively arenas where the fans can participate with the teams on the field of play,” said Hellmuth.

“The fans are right there, they are well lit, they all wear their colour coordinated T-shirts, and they’re part of the action. And it’s what generates global ratings: when people tune in, they see an engaged and focused audience projecting themselves onto the field of play – and they stay watching. They don’t change the channel. If you tune into a half-filled stadium, with no noise from the crowd – in any sport – you’re likely to turn away,” he said.

“In recognition that our fastest growing audience is on the phone – and that’s true for every sport – we’ve done something called Mobile View. We’ve put an NBA camera person in every venue, with a big 80:1 lens, and they shoot the Camera 1 – which is normally very wide and appropriate for television – they shoot it tighter, with only six or seven players [in view].

“When they come down the court and the player goes to take a shot they widen out to show the basket, and when the rebound happens they zoom back in. The shot is totally appropriate for the phone; it really works,” said Hellmuth.

“It turns out that has been very important for social media as well,” Hellmuth said, “because those clips play very well on social. Everything we cut for highlights comes from that feed – you can see the faces, you recognise the players, you know who they are. It has worked out very well.

“It wasn’t without expense, obviously. You could say, ‘well why don’t you just use a 4K camera and maybe do a cut within the 4K’? but you really need the storytelling: you need the lens in the hands of the camera person to really tell the story,” he said. 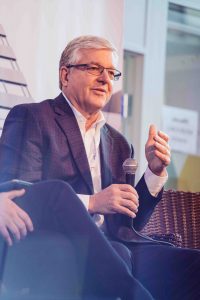 Kershbaumer asked Hellmuth to give his impression of Media City Bergen, and companies like Vizrt and Sixty that are very much embedded in the Norwegian media cluster along with broadcasters NRK and TV2 and other service providers plus the University of Bergen.

“We already have business with Vizrt and Sixty, two companies I greatly respect. It really is a new time, and the companies in Norway are correctly aligned. In social, 80% of the things that are watched have no audio. So we’re in the business of compressing information using a lot of tools, so that people can get more in less time – which is really what it’s all about. You don’t just want to look at a naked video clip; you want some graphics and analysis.

“The other thing we’re working with is live, in other words augmenting video with player tracking and other things, and also allowing users to find their own graphics – again, respecting the real estate that is offered by the mobile phone.

“For those reasons, and the focus on IP video, I felt this event in Bergen was a must-attend for me,” said Hellmuth.

The role of media partner companies with the NBA

Hellmuth went on to contrast how the NBA operates — in terms of its media outlook and partnerships — with another giant US rights holder, Major League Baseball. The NBA chooses to keep itself light on technology, and then pushes its partners hard and expects them to demonstrate and share its passion for basketball.

“First of all, let’s set the NBA in the landscape. You’ve all read about Major League Baseball Advanced Media – BAM – which was recently acquired by Disney. The CTO of BAM Joe Inzerillo and I are old friends: when I first came to the NBA in 1992 Joe was the video coordinator for the Chicago Bulls. We’ve remained close, and of course they [BAM] have done a spectacular job. I guess now they’re very focused on the Disney catalogue and going to war with Netflix and transforming ESPN’s mobile offerings,” he said.

“The NBA is completely differently aligned. The Commissioner has said that we should always focus on our leagues. So we’re focusing on the growth of the NBA globally, and on the WNBA. We also have a development league that’s now called the G League (for Gatorade League). And then we have an NBA 2K League that’s launching this Spring – it’s a video game. 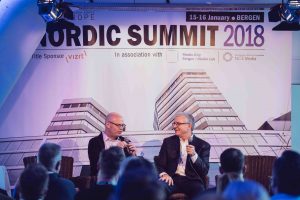 “The NBA could not get involved with shoot-em-up games of course,” he said, “so we decided to launch our own 2K League. Seventeen NBA teams own 2K teams, and they’re going to be drafting in the next month. If your 2K ratings are really high on X-Box or Sony Playstation you can register for the draft and try out, and maybe be on one of our teams.

“So maybe one of your sons or daughters, who spend all their time in the basement and whom you’ve given up on: perhaps they’re going to come to the NBA, make a ton of money and exceed all your expectations!

“That will be our fourth league,” he said. “So we partner with companies, like Sixty and Vizrt, and NeuLion for streaming and with Evertz for internal processes. We have a different model. We stay light on the technology and heavier on the operations and design – and work very closely with vendors that are passionate,” said Hellmuth.

“This will be familiar to Viz and Sixty: we trial you, we test you, we find out who you are and how passionate you are and what your leadership is and where you’re going. And then we push you beyond belief! Because we bring you into a place where a bunch of people are driven by passion for the brand. It’s a very different, difficult shop; it doesn’t run like normal media shops,” he said.

“We will work 24/7; we will not take a day off; we will work until it’s right. We won’t stop. That’s what’s different about a league as opposed to a media company where someone says ‘it’s five o’clock, time to go home’. We never say that.”