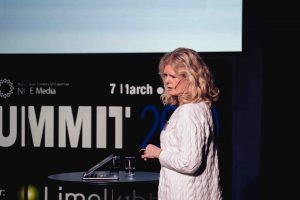 TV 2 provided a livestream on its open tv.no web site and on paid streaming platform Sumo during the Championships. The Camp Seefeld production, based close to the entrance, the accreditation zone and spectators also produced five minutes for primetime TV after the main evening sports news. This segment achieved a 26.2% audience share in Norway.

Marius Skjelbaek was the main anchor together with Petter Northug, and the team streamed six hours per day for eleven days of the Championships for a r total of 66 hours. Clips and sponsor-related content was also produced for social media platforms.

There were 15 TV 2 people on site in Austria, including the host, producer/team leader, two technicians, Petter Northug, a live reporter, live photographer, two two-person ENG teams, a web reporter, a bookings coordinator, social media producer, sponsorship liaison the a logistics person. Back at home were a producer, editor, and the regular web desks at Bergen and Oslo.

The total numbers with TV2.no and the apps were 1,181,000 for the livestram and clips. Their goal was 100,000 views per day, so it was a successful production, said Espelend.

19% of all Sumo customers saw the Camp Seefeld content. Viewing time on TV2.no and Sumo was quite similar, starting at 10 minutes and rising to 24 minutes on average. The total cost to TV 2, she said, was NOK 269,000 per day – and as a result 843 new Sumo subscriptions were sold.

She told the Bergen audience that reach on Facebook was 4,147,882, with 34,573 likes and shares achieved. On Instagram it was a reach of 1,130,440, with 59,555 likes. This session was presented by Espeland and was followed by an audience Q&A, conducted by SVG Europe editorial director Fergal Ringrose.