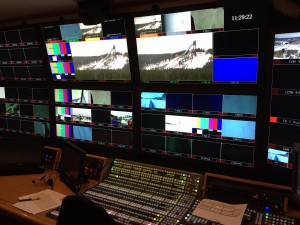 The FIS (International Ski Federation) Nordic World Ski Championships is underway in Falun, Sweden. During the twelve day event 700 athletes from 55 nations are competing in Cross Country Skiing, Ski Jumping and Nordic combined – where, as the name suggests, the winner is decided on the basis of one jump on the ski jumping hill and one cross-country skiing pursuit race. For Swedish broadcaster SVT, this is one of the biggest events it has covered for many years. In all, some 200 technical and production personnel are involved. The anticipated global audience is 500 million.

“We started our planning in 2011,” stated Adde Granberg, executive producer at Swedish Television. “Although we have covered these Championships previously this is the first time we have also acted as Host Broadcaster.”

This Host Broadcasting (HB) function is being carried out on behalf of the European Broadcasting Union. SVT’s Johan Bernhagen is directing the Cross-Country competitions while Björn-Gunnar Vellan is in charge of Ski Jumping. Alongside the HB commitments, SVT is also providing unilateral coverage for its own viewers. 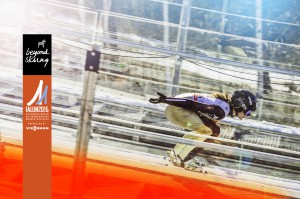 In an exercise that demonstrated Scandinavian co-operation, colleagues from Norway’s NRK are assisting SVT in certain operations. “Our sports department has not produced ski jump coverage for a number of years and when plans were being discussed that might include a new – and unique — jumping hill being included at Falun, we asked our Norwegian friends to help us out with all the knowledge they had gained – especially in the Oslo 2011 World Championships. That co-operation has worked exceptionally well.”

Granberg explained that the personnel from NRK worked with SVT when construction of the hill course was taking place. “This helped us identify the optimal positions for our cameras. It would be unforgiveable to miss any part of the action during the events. What’s more, we are going to have our staff shadowing the production personnel from NRK so that we will be in a good position to produce Ski Jumping in Falun after the 2015 event.”

Swedish Television has commissioned outside broadcast units from Mediatec and Norway’s OB-Team to provide the wide-ranging coverage of the events. Both companies have extensive experience of covering the events included in the Falun Championships. Mediatec has been involved in many of the World Cup cross country meets, including at the Falun venue. OB-Team assisted SVT with Host Broadcaster production of the World Cup biathlon last year.

“We will be utilising around 100 cameras across all the events,” reported Granberg. “These will include a number of specialist units such as wirecam, rails, multicopter, and polecams. We will also be using two hyper-motions for six times speed and five super slomo cameras for three times speed. The aim is to produce as much innovative coverage as possible with all the resources to analyse skiers and jumper techniques and performances.

The International Broadcasting Centre (IBC) is located at the Lugnet Arena within the sports complex in Falun. The OB compound covers around 12,000 square metres.

“We will service the requirements of 26 international broadcasters from this facility,” said Granberg. “The arrangement is that each broadcaster will provide its own equipment for use within the IBC.”

Granberg revealed that there are no plans for 4K coverage of the events at Falun. However, the broadcaster is providing second screen options for the Local Organising Committee at the Live Arena within the sporting complex. He concludes, “Our goal for these Championships is simple: To take sport production to the next level.”