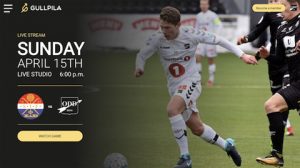 Odd selected Crystallize as the foundation to launch a new subscription-based live and on-demand video service, Gullpila, bringing the service live in only six weeks from project kickoff

Known locally as Odd, Norway’s oldest existing association football team and a member of Eliteserien, the country’s top professional league, sought new paths to generating revenue from its high value video content prior to the 2018 season. Rather than selling rights to a third party broadcaster or content provider, the team’s leadership preferred a direct approach that would afford greater control over its content, facilitate innovation and experimentation, and support an engaging, personalised experience for its ardent fan base.

The time and expense associated with designing, acquiring and maintaining a traditional over the top (OTT) video infrastructure made cloud services an attractive alternative for Odd. Odd found both the video processing and delivery technology and the e-commerce capabilities it required, all powered by AWS services. Odd selected Crystallize as the foundation to launch a new subscription-based live and on-demand video service, Gullpila, bringing the service live in only six weeks from project kickoff.

Bård Farstad, CEO at Snowball Digital, told SVG Europe at TV Connect in London: “The Crystallize platform lets forward-thinking organisations like Odds Ballklubb customise video services to their audiences, while taking advantage of a virtually turn-key solution for distributing OTT video, at scale, to subscribers anywhere. We’re delighted by the capabilities of AWS solutions to enable services like Gullpila – and any Crystallize customer – to engage their audiences in new ways and generate new revenue streams.”

Farstad continued: “Rather than an ad-based revenue stream, Odd wanted a subscription-based service for fans, and also to build on fan engagement as well as stream live matches. It also wanted to produce instructional videos so kids who want to be the next goal keeper, for instance, can see real goalies demonstrating techniques. Those instructional videos can also help grow the audience base; it’s not just for fans as it’s basically e-learning direct from football players.”

AWS Elemental’s chief product officer, Aslam Khader, commented: “After the launch of AWS with Elemental on 1 December, we hoped customers would then start launching services that would prove the point.”

The AWS Elemental service launched on 1 December 2017, and Crystallize launched its service to help people monitise video on its platform in January.

Continued Khader: “This changes the mindspace about how companies operate; if you can spend $10 and three weeks and see if something is working or not working, you can see your ability to succeed. This is democratising technology and providing a secure, scalable, robust service pay as you go. It is fostering agility and choice, leading to the flywheel of innovation, scaling up rapidly.”

Farstad concluded: “In sport, athletes almost become their own media company thanks to social and ad deals. This new service means they can take this infrastructure we provide and even a single person can set themselves up like a big company, and scale.”

Crystallize is a new service with a platform-as-a-service approach to building and managing subscription-based video services in the cloud. It combines a robust e-commerce engine to manage subscriber access and process payments with a complete video processing and delivery infrastructure. Designed as a ‘headless’ e-commerce solution, Crystallize enables Odd to customise the user experience for its audience and easily integrate with back end services via REST API, GraphQL, and webhooks. The platform’s e-commerce functionality relies on the Amazon Relational Database Service (Amazon RDS), AWS Lambda function, Amazon ElastiCache for Redis, and AWS Elastic Beanstalk application.