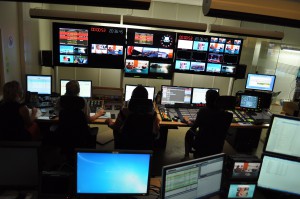 The Sommertid (Summer time) show is a key part of the TV 2 summer schedule. TV 2 is the largest commercial television station in Norway and a wholly-owned subsidiary of Nordic media group Egmont. The live one-hour programme runs four days a week for nine weeks during the summer months. Traditionally Sommertid was shot on the roof of TV 2’s facility house. For 2014, the team decided it would be more dramatic and exciting if the backdrop were the bustling Oslo harbour, marine docks and restaurant area. To facilitate this, the production set was situated on a floating pier on which local and international talent were interviewed and interweaved with live musical segments.

Normally this would necessitate using an OB truck. However, OB trucks are relatively expensive and the floating-pier location meant that the OB truck would have to be at least 300 metres from the cameras, adding a great deal of cabling leading to higher complexity and set-up and running costs.

TV 2 had already used Norwia’s miniHUB to simplify operations at various live news-based events and wanted to explore the possibility of extending this cost saving and complexity reduction to the production of Sommertid.

TV 2 had to be confident that the solution chosen would be technically up to the challenge. It was critical that video and audio quality would be just as high as previous years. More than that, the TV 2 technical team also had to be sure that the control of the cameras and lighting would not be adversely affected by the distance between the studio and the OB location.

Additionally there’s a third test that had to be overcome – human interaction between the teams. Put simply, the ‘communication test’ is: could all production staff communicate efficiently so that the programme could be made just as well when the audio engineers, lighting controllers, technical directors and vision directors were kilometres rather than metres away from the cameramen and the talent on screen.

Further from the action

The TV 2 technical team looked at IP-based systems; however they believe that the solutions on the market today are not yet mature enough for the Sommertid project. The technical team knew that any but the most minimal latency would produce control and communication issues. It was therefore decided to choose a solutions contributing uncompressed video from the OB location to the studio, because as the TV 2 technical team commented, “transporting uncompressed video just kills the latency issue”.

Norwia solutions had already proven their reliability to TV 2, with a handful of Norwia miniHUBs deployed at important Norwegian locations. After trialing equipment from a number of vendors, TV 2 decided that deploying Norwia miniHUBs fed by Sony HDC-1500 cameras operating in coax mode with uncompressed video could pass the technical, control, human interaction and reliability tests.

The miniHUBs supported 64 high-quality MADI audio channels in each direction. This may sound like overkill, but when you’re using audio for control and communication purposes as well as feeding uncompressed audio for mixing, it’s easy to use a high number of audio channels.

The result? Sommertid did not suffer in quality at all from the changes to the production methodology or location. The equipment operated fault-free. The fibre circuits operated without issue.

After initial concerns, the audio engineers were happy that the system “just worked”. The lighting engineers were happy that they could operate just as efficiently from five kilometres away as they could from 10 metres. For the cameramen it was situation normal; they just got on with recording the action. The video editors where happy to be working in their normal day-to-day studio environment, rather than in the less familiar surroundings of an OB truck.

The technical team was pleased to have reduced cost and complexity and the accountants at TV 2 were of course happy that the budget for distributing the video and audio from the location to the playout centre was slashed by up to 70%.

The technical team at TV 2 expects that it will be using Norwia miniHUBs more often in the future for its OB events and is already planning to use a similar solution as part of its autumn and winter programming.

Discussing the TV 2 project, Norwia CTO Lars Erik Eriksen said: “The Norwia AutoSFP functionality enabled TV 2 to virtually morph the system into whatever they liked. I know this sounds like magic, but the incredible flexibility of the miniHUB optical distribution platform is real and truly unique.”

The TV 2 Group transmits on a main channel and a number of niche channels. TV 2 News has broadcast news 24 hours a day since 2007. In the same year TV 2 launched its own sports channel, TV 2 Sport, and has since expanded the sport focus to three HD channels solely broadcasting English Premier League. These niche channels complement TV 2 Zebra, broadcasting entertainment to younger Norwegians since 2005. The film channel, TV 2 Filmkanalen, broadcasts films 24 hours a day.