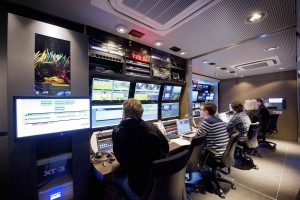 Inside the sustainable OB van used by DutchView

When the National Soccer League match between SC Heerenveen and Vitesse commences later today (28 May), the live broadcast transmission will consume about a third less electricity than usual. The cost and energy-efficient live production has been made possible because of the sustainable OB van created by service company DutchView.

With the first sustainable OB van, DutchView has established a new benchmark in the broadcast business. This energy-efficient television production vehicle consumes 30% less energy than a traditional OB van, which makes it a real cost-cutter.

The approach of the Dutch service company is to be as sustainable as possible in the broadcast market. DutchView operates 14 studios in Amsterdam and Hilversum where large-scale television productions, such as entertainment and talk shows, are produced. The company, the leader in the Dutch market, owns a huge fleet of OB vans for broadcasting Netherlands national soccer league matches as well as outdoor festivals. “When you put together a TV production truck, you have to take into account its different aspects, such as the vehicle, the technical equipment, and the air conditioning in order to see how you can make it a bit more sustainable,” reports project manager Peter Slot.

Back in 2010, when DutchView began developing the idea of a green OB van, many essential elements of sustainability, such as LED lights and OLED monitors, were hardly available for high-end production. LED lights were available in the market at the time, but the main challenge was creating an LED lighting scheme for the truck. “We were early adaptors when we tried to get professional video monitors without tubes,” reports Slot. “Nowadays it’s not an issue anymore because the whole market has shifted towards OLED and LED.” Among the various HD monitors in the sustainable OB van are four OLED screens that are used in the camera shading and control area.

This advantage pays off twice because OLED and LED lights require less air conditioning. This Dutch service provider was also in the vanguard when it set up a separate equipment room in the truck and supplied it with its own air conditioning system. This is more efficient because computer servers need lower temperatures than the crew. Meanwhile, this solution has become a benchmark of quality in the broadcast industry.

The choice of truck is also of critical importance. “We chose a diesel engine that runs on liquefied petroleum gas (LPG) 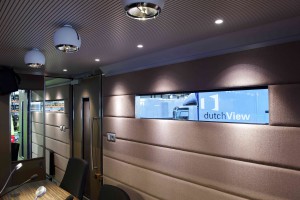 because a fully electric or hybrid vehicle was not an option for a 25-ton truck.” OB vans don‘t usually have to travel long distances in the Netherlands in order to get to a production location. But in 2014, a DutchView crew drove to the Olympic Games in Sochi in a sustainable OB van.

When it came to the television production equipment inside the OB van, the goal was to develop switchers and routers that consumed less energy.

Even the furniture has been designed for sustainable production. The wood for the desks has been certified by the Forest Stewardship Council (FSC), a trademark for sustainable forestry in Germany. Natural products are used for the walls and ceiling; the flooring is recycled PVC.