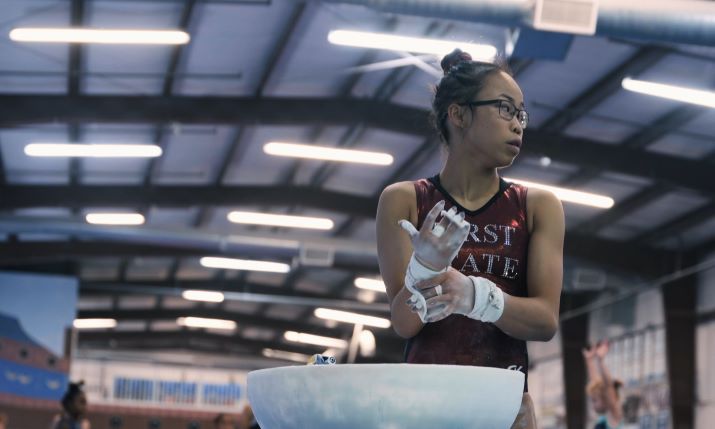 Olympic Channel documentary, All Around, was filmed in the year running up to the postponed Tokyo Olympics. Pictured is one of the All Around stars, Team USA’s Morgan Hurd

Four years on from its launch, the Olympic Channel has stated that this year returning monthly viewer figures have skyrocketed, while the channel has experienced over 3.3 billion views across all platforms since its inception.

From providing content surrounding the Winter Youth Olympic Games (YOG) Lausanne 2020 and creating localised coverage ahead of the Olympic Games Tokyo 2020, to launching worldwide digital campaigns that engage fans at home during the COVID-19 pandemic, the fourth year of operation for the International Olympic Committee’s (IOC) Olympic Channel has proven to be groundbreaking.

Continuing its upward viewership trend, the global digital platform keeps users coming back, with a 65% increase over the previous 12 months in monthly returning users (MRUs), one of the key metrics for the long term success of the Olympic Channel.

On social media, the Olympic Channel community has grown to more than 10.4 million, with 74.9% of those engaging with content on social media under the age of 35.

Key to the Olympic Channel’s fourth year of success was its coverage and promotion behind Lausanne 2020 as a worldwide digital rights holder, which ensured global coverage for the Winter YOG for the first time and led to the event being the most digitally consumed Winter YOG to date.

Additional growth drivers during the past year include the Boxing Qualification Events for Tokyo 2020, digital engagement campaigns for the IOC during the COVID-19 pandemic, which highlighted athletes and home workouts across social media, localised content in Japan and India, award-winning original programming and coverage of key events in support of Tokyo 2020.

Juan Antonio Samaranch, chair of Olympic Channel Services, said: “Over the course of four years, the Olympic Channel has made great strides in reaching fans and younger audiences and where and how they consume content by providing more personalised content across multiple platforms. With less than a year to go to Tokyo 2020, now taking place in 2021, we expect another record-breaking year ahead as the Olympic Channel team continues to build excitement for the Olympic Games both in Japan and to a worldwide audience.”

In the four years since its launch on 21 August 2016, the Olympic Channel global media destination has produced more than 25,000 pieces of video content representing all Olympic sports disciplines and 206 countries, including 76 original series and films, resulting in more than 3.3 billion video views across all platforms. Average watch time on the platform is 8:05 minutes per video watched.

General manager of the IOC’s global Olympic Channel, Mark Parkman, said: “Engaging fans with a deeper and more immersive digital experience by serving more relevant content is a key area of growth for us. The past several months have brought unprecedented challenges to our industry and organisation. But our ability to continue to grow during the COVID-19 pandemic is a testament to the global appetite for inspiring, entertaining and compelling stories featuring Olympic sports and athletes and the tireless efforts of our entire team to engage fans with the Olympic values.”

Distribution of Olympic Channel-created content in 12 languages has also increased through the implementation of a multi-platform strategy that includes the digital ecosystem of Tokyo 2020, olympic.org and the Olympic Channel itself. The Olympic Channel continues to collaborate with the Tokyo 2020 Organising Committee to develop and build its digital offerings and operate the international versions of the Tokyo 2020 Games-time website, which launched on 26 February 2020, and mobile app, which will launch in spring 2021.

In addition to the IOC’s owned and operated digital platforms, the Olympic Channel has established a new distribution outlet for its 95 federation partners, and has streamed more than 5,400 live events, adding to organisers’ media distribution rights and ensuring global coverage of their events. Partners include International Sports Federations (IFs), National Olympic Committees (NOCs), IOC-Recognised Federations and organisations, and multi-sport event organisers.

Also contributing to the Olympic Channel’s success are strategic distribution partnerships with the IOC’s rights-holding broadcast partners (RHBs) and NOCs, including recent launches on CBC GEM (Canada), Swisscom (Switzerland) and 7plus (Australia), bringing a linear presence to 175 territories complementing the global digital platform.

Additionally, through its Founding Partner programme, the Olympic Channel has worked with Worldwide Olympic Partners to co-create multimedia programming, including Olympic State of Mind presented by Bridgestone and What Moves Me presented by Toyota, which further associate their brands with the Olympic values and ultimately reach wider audiences worldwide.

International Gymnastics Federation (FIG) president, Morinari Watanabe, said: “The Olympic Channel’s athlete-centric programming reveals the level of dedication, commitment and focus it takes to be an Olympian. Their wide reach and easy accessibility across digital channels provide federations, including FIG, with an important platform to reach sports fans all over the world with an up-close look at our sports to bring the amazing stories behind our athletes to life.”

GAISF president, Raffaele Chiulli, said: “The Olympic Channel has provided GAISF’s members with an invaluable platform to amplify the efforts of athletes, to reach global audiences and to maximise the inspirational impact of sport. We value the Olympic Channel as a vital partner, helping us to tell sport’s stories every day.”

Olympian Alexi Pappas (GRE), who co-wrote and starred in the feature film, Olympic Dreams, added: “As an Olympic Athlete, I am inspired by the Olympic Channel’s passion for sports, storytelling and the Olympic Movement. The Olympic Channel has given me a voice beyond my competition – they are believers in potential, and they believe in me.”

The Olympic Channel launched following the Closing Ceremony of the Olympic Games Rio 2016 in support of the IOC’s goal, set out in Olympic Agenda 2020. Providing an innovative platform for promoting Olympism and engaging younger generations and new fans with the Olympic Movement, the Olympic Channel offers worldwide exposure for sports and athletes 24/7/365 through award-winning original programming, digital content, news coverage and live-streamed international sporting events.