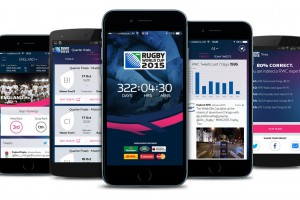 As demonstrated last summer with fans’ record rate of multiscreen content consumption during the FIFA World Cup, large-scale sports events require much more than just a high-quality linear telecast these days. With that in mind, worldwide governing board World Rugby has made the mobile and tablet experience a priority in the lead-up to this year’s Rugby World Cup — the world’s fourth-largest sports event — and has enlisted New York-based digital consulting firm Omnigon to lead the effort.

“We have learned a lot about how to do this in scale and how to build products for millions of fans,” said Omnigon chief commercial officer David Nugent. “We cut our teeth on large properties, primarily in North America, and, to be able to go into markets that are about 18-24 months behind North America in terms of consumer adoption and technology, we believe we can create tremendous value for [World Rugby].”

Omnigon was selected to develop the official 2015 Rugby World Cup mobile app as part of the digital experience leading up to the tournament. The app is being released in three phases: the mobile app is already available for download, followed by the final two phases and a tablet version set to roll out in advance of the tournament in September.

Despite a heavyweight list of U.S. sports clients — including PGA Tour, NASCAR, the NFL, Fox Sports, and WWE — the Rugby World Cup app marks Omnigon’s largest international client win to date. Omnigon, the only non-European bidder, was chosen after an extensive selection process by a committee composed of World Rugby, England Rugby 2015, and IMG.

Soon after Omnigon opened its London office in January 2014, managing director Alex Chamberlen worked closely with World Rugby head of Commercial, Broadcast, and Marketing Murray Barnett and his team to develop a digital strategy intended to cater to fans before, during (both in-venue and out), and even after the Rugby World Cup.

“World Rugby needed a revamped site and an impeccable mobile experience,” said Nugent. “They understand, as most large governing bodies do, that mobile is the most important part of their digital strategy. They wanted to know if that was something we would be interested in and how would we service them, so we entered the RFP process. At the end of the day, because we have been responsible for some very large offerings or very high-level sports properties, … I think we can offer a unique proposition within this [industry].”

Phase 1: Getting it all started

In the end, World Rugby selected Omnigon and opted for a three-phase product with an eye on launching phase 1 last autumn, phase 2 this spring, and phase 3 in time for the Rugby World Cup opener.

The first phase of the app, available now for iOS and Android smartphones internationally, enables fans to receive World Rugby news, specific-team information, tournament dates, venues, ticket information and details, and matches and pools. In addition, the app offers numerous social-media features allowing fans to engage with each other and the teams, participate in trivia quizzes, and view archival World Cup videos.

“The first phase is just about getting the information out there to the hard-core fans that are demanding schedules [and] ticket information, and we have a really cool quiz component,” said Omnigon director of Sports Products Nick Arcuri. “It’s a baseline app with news and information and a lot we can build on from there.”

In the spring, the app will be released in Spanish, French, and Japanese and will provide details on the World Cup trophy tour that will take place throughout the UK in the 100 days leading up to the tournament. Phase 2 enhancements will also focus increased push notifications and location-based services.

“We will have a very interactive experience within the app that will help fans follow the trophy, view the trophy, take pictures with the trophy, and share them. It’s all going to be sponsored around the commercial partners,” said Arcuri. “There will also be rugby festivals throughout the UK, and we are going to help promote those festivals within the second phase.”

Phase 3: Catering to fans — no matter where they are

The completed app, launching ahead of the Rugby World Cup in September, is slated to include features that enhance the in-stadium experience: in-venue messaging and offers, live match coverage, expert analysis, stats, scores, video highlights.

“Right before launch is when Omnigon will really shine with data visualisation [and] live match-centre information and [will take] the game experience to the next level for fans inside the stadium, outside the stadium, and at home watching on TV, [as well as for] those fans that cannot watch,” said Arcuri. “That is when the majority of the users will start coming on board and downloading, and we’re tremendously excited for that phase.”

Stay tuned for more coverage in the coming months of the eighth Rugby World Cup, which will be held throughout the UK beginning September 18. With 80 countries competing for 20 tournament spots, the event is expected to be seen in more than 205 countries. The 2011 tournament had a cumulative world TV audience of almost 4 billion viewers.