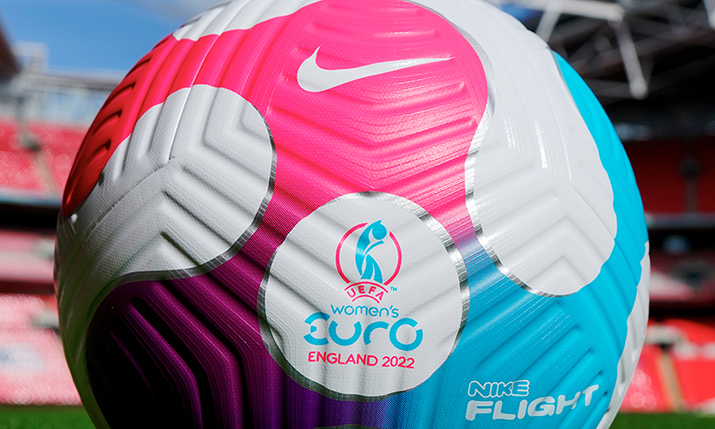 Wednesday 6 June marked the opening of the UEFA Women’s Euro 2022 in the UK, with the first match being England vs Austria. Stats Perform has been covering the event unlike any other international women’s football tournament previously, reiterating its commitment to promoting women in sports.

Stats Perform’s news team has 25 members of staff accredited for the tournament, who have been travelling the length and breadth of the country to provide some of the industry’s leading names with coverage. The team have been covering, and will continue to cover, all games at the tournament from the opening game at Old Trafford to the final at Wembley on Sunday. They have also been bringing all the behind-the-scenes content from team base camps, fan parks and much more.

Louise Bawden, Stats Perform managing editor for major global events, and one of the accredited staff fully in among the action on the ground and behind the scenes, talks to SVG Europe about her work on the tournament.

I’m the managing editor of news and major events, which encompasses overseeing the operational functions within the news department. This involves organising and facilitating the planning, logistics and execution of newsgathering at the world’s biggest and best events, as well as our daily outputs to clients.

For the Women’s Euros specifically, I planned out the tournament coverage from the earliest stages of budget forecasting right down to leading the coverage on the ground. This is carried out by 25 of Stats Perform’s journalists across the country.

What is the importance of your department (and the news team) to Stats Perform?

The Stats Perform News team provides the highest-quality news output for both video and editorial clients, while leveraging the Opta data which is intwined into our content across multiple sports. We are the heart of the moments that matter in the sporting calendar. Our video service incorporates content for broadcasters, digital publishers and various other media and can be found using the PressBox Video function.

Whether you want a viral clip of Ellen White playing basketball against the media or data-driven analysis of Barcelona’s capture of Robert Lewandowski, Stats Perform News provides clients with the most varied, sought-after content for their audiences. Our editorial wire provides clients with match reports, previews, feature analysis, deep dives and first-class live text commentaries across multiple languages – all while harnessing the power of Opta data into their offerings – which separates our service from your everyday newswire

What is Stats Perform providing to clients and who are these clients?

Throughout the tournament, Stats Perform News has provided clients with wholesale coverage of the biggest-ever women’s football tournament. From pre-tournament analysis through to our Player to Watch series, team focus previews and exclusive interviews across multiple regions, audiences were well-versed before a ball was even kicked.

On a daily basis, clients received content from our extensive newsgathering on the ground which featured every pre- and post-match conference, mixed zone and team camp activities as well as hearing from the travelling supporters from every nation.

Clients such as Livescore have installed a Women’s Euros-specific tab on their globally popular app, showcasing out content in a prominent manner.

Said Rob Brown, head of media at Livescore: “User engagement with our Women’s Euro 2022 coverage has exceeded all hopes and expectations and Stats Perform’s daily video and written content has played a key role in enabling us to deliver the latest news, insight and reports throughout the tournament.”

What have been the highlights so far?

The highlight of the tournament so far is seeing the biggest team we’ve ever leveraged for a women’s football tournament. From the previous Women’s World Cup in 2019, Stats Perform News’ team on the ground has grown 400% to ensure we’re giving the event the coverage it demands. This further highlights Stats Perform’s commitment to giving women’s sport the platform it deserves.

As the DNA of sport, we are strategically incorporating the women’s game – whether that be the WTA, or being data providers to, and international rights holders of, the WSL – into our offering, exhibiting that we are committed to the future growth of women’s sport.

Why do you think the tournament – and the women’s game – is breaking so many records?

The Women’s Euros is the culmination of a long-term plan put in place to bring further parity between the women’s game and the men’s game at all levels. These records show the appetite of the fans for this, as well as the progress made by stakeholders, to engage with the women’s game at the highest level.

UEFA’s head of women’s football Nadine Kessler spoke exclusively to Stats Perform pre-tournament and gave an in-depth assessment of where the women’s game is at and highlighted just how important this competition would be to spread awareness of that growth.

Will Stats Perform be covering the Women’s World Cup and do you think we will be seeing more records being broken?

Yes, logistical and budgetary planning have already begun to cover the Women’s World Cup next year. We hope that records that will continue to tumble, but perhaps an even bigger indication of the increasing passion for women’s football is seeing how many fans from different countries will make the lengthy trip to Australia and New Zealand to see their nations in action.

And, while the World Cup is important, the biggest legacy this increased focus can leave is driving attendance figures and engagement in domestic leagues across both Europe and the wider footballing world.

What other teams at Stats Perform are helping to support the tournament?

Along with the news team, Stats Perform’s data insights team has been producing pre- and post-match insights for all 31 matches, delivering their content to a variety of industries across multiple territories. This includes national broadcasters the BBC in the UK, SRF in Switzerland, NOS in the Netherlands and TF1 in France; press including L’Equipe in France, Livescore and BBC in the UK, and Voetbal in the Netherlands; federations in the form of The FA in England, FIGC in Italy, FFF in France and DFB in Germany; and official sponsors Starling Bank.

This is in addition to a wide range of sports news and scores publishers, fantasy providers and betting operators.

The team behind Stats Perform’s site The Analyst have also created a Women’s Euro 2022 stats hub that has been updated live throughout the tournament. The hub includes predictions, standing, player stats and team stats.