On the RECkord: Old vendor loyalties are tested by move to Ultra HD 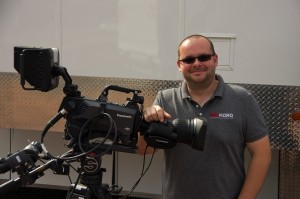 Although still to make the final decision, Robert Kallista intends to move from Sony to Panasonic for RECkord’s new UHD cameras

When outside broadcast companies equipped their HD OB trucks, there was generally one major choice to make: Sony or Grass Valley. However, moving in to the era of Ultra HD and IP is giving other manufacturers a chance to make their mark. A case in point is the new 16-camera OB being finished by RECkord Outside Broadcasting, from the Czech Republic. REC7 4K is its first UHD OB truck, and the company’s owner/CEO, Robert Kallista, has opted for an all-new approach.

The 12.6m trailer is built around a SAM mixer and router. The final decisions about cameras, lenses and servers have yet to be made, but “I think we will probably have Panasonic cameras [AK-UC3000], Fujinon lenses and the new Snell LiveTouch servers,” said Kallista.

The LiveTouch system, if that is how he goes, is possibly Kallista’s most radical departure from the norm. “Sometimes, having no EVS may be a problem, because that is what everyone is used to, but the LiveTouch is a good product. Besides, having Snell mixer, router and servers means greater compatibility,” he explained.

The Kahuna was an easier choice. “I think it is very nice. It has no problem with mixing signals, such as HD upconverted to 4K,” he said. “There is also no problem for converting to IP in future.” This is his first SAM desk. Of RECkord’s other OBs, three use Sony switchers, one is a Grass Valley Kayak, and one a Ross Video Vision (two SNG trucks also use Ross Video CrossOver Solo desks).

“For 4K, I think Snell is the best approach for the future. For example, Sony is very good, very nice, but very complicated to licence for 4K.”

At IBC, REC7 4K was exhibited with the Panasonic camera, and he was 90% sure that would be the final choice. The single MOS sensor AK-UC3000 can outputs a 50p UHD signal, and also boasts improved HD picture quality. It uses a B4 mount to accommodate 2/3-inch lenses. “They are very good cameras, at a very good price, with good pictures, and I believe Panasonic has good support,” he explained.

“We have only ever had Sony cameras up till now. We have 45 Sony HD cameras,” he added.

The single expanding side truck will require another two months to finish and test, and will go into use in November. It will normally be used in HD, at least initially, but he expects concert productions will want to shoot UHD. Although RECkord does a lot of sports production, there is no UHD transmission in the Czech Republic, or indeed in most of the rest of the former Eastern Bloc EU states, however, he has customers in Germany and other central European countries that may want UHD in the year or so. Besides, “this is an investment in the future,” he said.