Online football-focused publisher Dugout expands to include leagues and federations 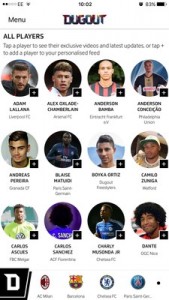 Egypt is the number one country on social media for football. Bayern Munich has more Egyptian followers than Germans. It’s that type of insight which has persuaded dozens of the world’s leading soccer clubs to join Dugout, a digital publishing platform focused on football.

“Data is crucial to sports teams and sponsors,” says president and co-founder Elliot Richardson. “Without it and their spend is blind.”

Over 8 million users have joined the platform generating 13 million page views of lifestyle and behind-the-scenes access since the launch of Dugout.com at the end of November and release of an app in March.

A total of 42 clubs are on board, each with their own page on the site. The list includes A.C. Milan, Arsenal, Monaco, Barcelona, Juventus, Liverpool, Manchester City, PSG, Corinthians Paulista and Real Madrid. Over 150 players have pages as well, including Gareth Bale, Alexis Sanchez and Neymar – even Pele.

Another 33 clubs are pending signature and Richardson reveals that three major European leagues and one European national federation are also poised to announce.

Players and clubs are ‘publishers’ according to Dugout – as are actual publishers like a broadcaster. Sky Sports has been involved for a while and is the seventh largest publisher on the site.

Senior executives of seven clubs – PSG, Bayern, Liverpool, Manchester City, Arsenal, Juventus and Chelsea – are listed as directors of the UK-based company, but all the clubs are stakeholders, according to Richardson.

While free for users (“audience growth is much more important than monetisation in the initial phases,”) he says, Dugout will target them with advertising and has built its own programmatic ad stack across 21 exchanges.

Former Google and Buzzfeed executive, Kate Burns, has been brought on to drive the commercial side. Dugout is also working with brands including Allianz, Coca Cola and BetVictor to create ad-funded content.

Two examples, Touch and Wall Ball, involved 80 players from 16 clubs. For Touch, players competed to bring under control footballs fired at 80mph. Wallball was an even simpler idea: a competition to kick a ball against a wall using just one foot.

“Both showcase the amount of time we can mobilize with top players to achieve something that clubs couldn’t do themselves,” says Richardson. “We could overlay stats and rebrand elements of the creative, such as the wall, for different brands.

“All the teams are willing to create branded content in collaboration or individually. Dugout can become a central point for branded content. We can create geo-specific and group targeted content.”

In some senses the site would seem to compete with Facebook – but Richardson says part of its attraction is that every piece of social media distributed by its publisher-members also appears on Dugout.

“It creates quantity but we also use algorithms so that some of the content which doesn’t get seen on other platforms gets surfaced,” he says. “Fans will tend to follow just one club Facebook when they actually follow more than one club but don’t want their friends to see it. The fact that we haven’t got user-generated content, it is away from the clutter. We’re a publishing platform with social elements.”

It also has club archive content. Rather than just play this straight out Dugout’s editorial teams are repurposing clips to suit different markets and themes.

In addition, it has hundreds of pieces of exclusive content which it can publish ahead of other platforms. “Clubs and players are contracted to give a minimum amount of content [to us] a month,” he says. 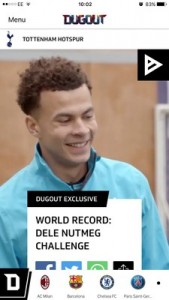 The app includes a wealth of features including the ability for fans to create their own personalised experience by choosing clubs and players to follow and vertical video shot by players on their own phones.

Then there are Dugout Originals – branded content typically which Dugout creates and films. Touch and Wall Ball are examples.

Live streaming seems a logical move for this ambitious venture – but not yet, since it would impinge on the TV contracts of its stakeholders.

“If you go anywhere near live games there are all sorts of problems,” he says. “In any case, we get most traction pre- and post-game – not during being broadcast. We are interested in reaching fans for the other 22 hours of the day.”

That said, Dugout is about to launch live streaming to the site of select club summer tours – footage from drones, of tunnel cams, and other insights in and around the game. A video podcast will launch at the end of June.

It is expanding its languages – currently standing at eight (English, German, Italian, French, Spanish, Catalan, Portuguese and Bahasa/Indonesian) – and plans to expand content versioning. “Editing content with a different tone or music will resonate more in different territories,” Richardson says.

It uses the Ooyla online video player and is hosted on AWS. The largest number of users are in the UK, followed by the US. 33 percent of users are returning “so we’re getting a good response back”.

“We’re trying to share best practice of what works in terms of content and technically with the clubs,” says Richardson. “We send out regular information about what worked best through social, and what works less well.”

Richardson’s own background is in business and finance rather than sports although he had links with Manchester City at the time of its takeover by Sheikh Mansour and Khaldoon Al Mubarak. Stemming from that experience and another working for Manchester United sponsor AON, he spotted an opportunity over three years ago to cultivate the data which he believed even these top clubs lacked.

“Our research pointed to an incredible overlap of fan bases. I was astonished at how dramatically lacking football clubs were in quality data to better engage their fanbase.”

Richardson saw a less ‘tribal’ fan emerging throughout global football. Fans now follow an average of 4.6 teams. Barcelona and Real Madrid are the seventh and eight most supported teams in the UK, he says.

“TV rights deals have created a huge fanbase for soccer clubs that may never visit the particular stadium or visit the team in person,” he says. “There are people growing up in Asia and even the U.S., who don’t necessarily have a particular club or team, but are starting to follow multiple teams in different leagues.”

It’s also interesting he says that younger people may learn about players through a computer game like FIFA, he says, and follow these players throughout their careers.

The research also found that fans now ‘support’ individual players, meaning that these stars help grow the global fan base of every team they play for during their career.

Zlatan Ibrahimovic, for example, began his career in Malmo and went to some of the biggest teams in the world. Fans have stayed attached to him and they naturally pick up an affinity to the club he goes to play for. There’s no question that the fans follow the players everywhere. And those players and clubs are benefiting from each other’s social media reach.”

Is the Dugout model applicable to other sports? “It’s all about scale,” he says. “We have a lot of road left for us to run. We’ve got the major teams in Europe and Latin America but the game is global. We’ve enough on our plate with football for the next six months at least.”