Open Championship returns: CTV and ETP at the centre of production as Sky Sports and NBC work remotely 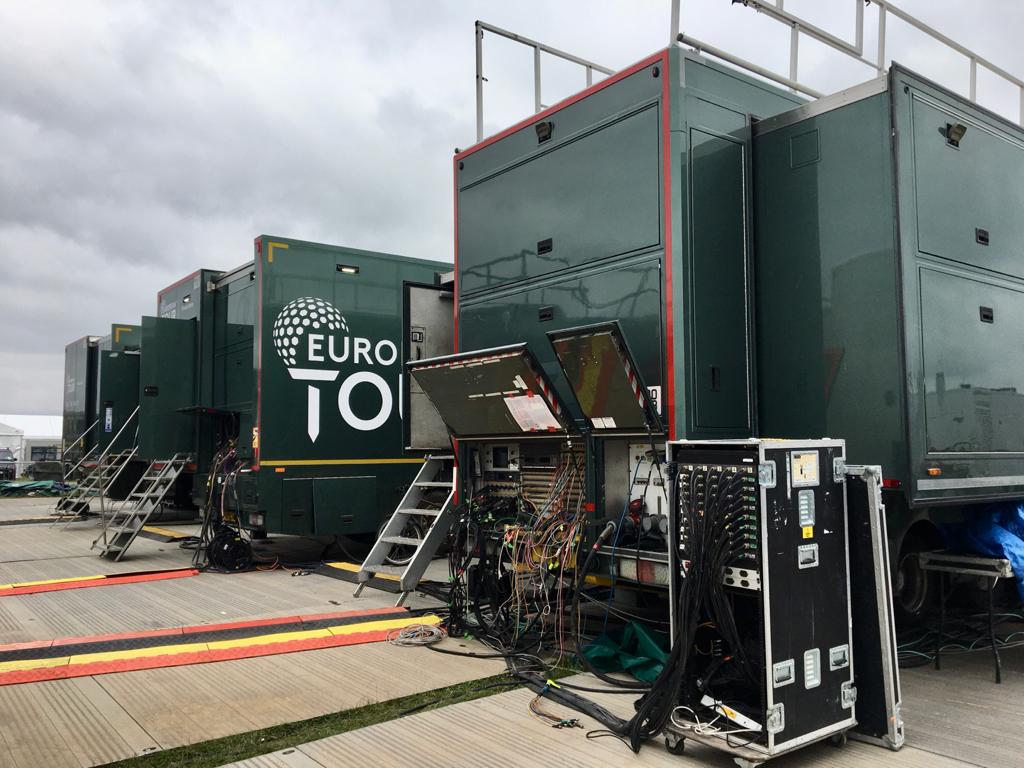 The 149th Open Championship has been in pause mode since last July, but the world’s best golfers will finally take to the tee boxes at Royal St. George’s in Kent, England today (15 July).

And for Hamish Greig, CTV OB chief executive, and the rest of the team from CTV, European Tour Productions (ETP), and the Royal St. George’s, it’s great to be back on site.

“Everyone’s so happy that it is back,” he says. “I was just driving around last night past the 16th hole which is such an impressive killer par three and it was great to see all the stands and the flags up.”

While there will be 32,000 fans a day coming out to the course, there are less rights holders on site due to COVID-19 protocols, the Olympics (NBC is producing the golf world feed for the Games), and simply new ways of working (Sky and TV Asahi are producing it remotely).

“The compound has a smaller footprint but there’s still a fair number of staff here from NBC Sports and the Golf Channel,” he says.

This year’s camera count is around 145 (typically that number is between 175 and 190) including roughly 27 wireless cameras which include three wireless Xmos super slo-mo cameras and a plane for aerial coverage. With respect to speciality cameras, ACS will once again provide 10 bunker cameras and several rail cams and robo cameras. Broadcast RF and CTV’s Golf RF inventory is handling wireless needs with 27 radio cameras, 90 radio mics, 64 Duplex and IFB channels, and around 600 walkie talkies.

“Everyone’s so happy that it is back. It is great to see all the stands and the flags up.”

CTV, as part of EMG, is using all the power of the group, with six CTV scanners plus two flypacks, two Telegenic scanners, speciality cameras from ACS, and BRF looking after 21 of the 27 RF cameras.

“Communications wise all the trucks are connected via RVON to make a huge master frame but giving the ability for any production stream to easily communicate with any other, irrespective of whichever truck they’re working from,” says Greig.

As for new technology, this is the first Open Championship that will use Hawk-Eye for the super ISO needs.

“Super Iso ensures every hole is covered and makes sure we don’t miss a thing” says Greig. “We have 70 channels of record and two onsite stations with four operators to supplement our Red, Blue, Brown and Gold Live sub mix area and then 12 Hawkeye operators are working remotely from Basingstoke, and one station for NBC operating from the USA ”

The super ISO efforts this year echo what the PGA Tour has done for The Players Championship at TPC Sawgrass in the US. Those efforts were the backbone of every shot live service that was produced primarily out of Basingstoke. 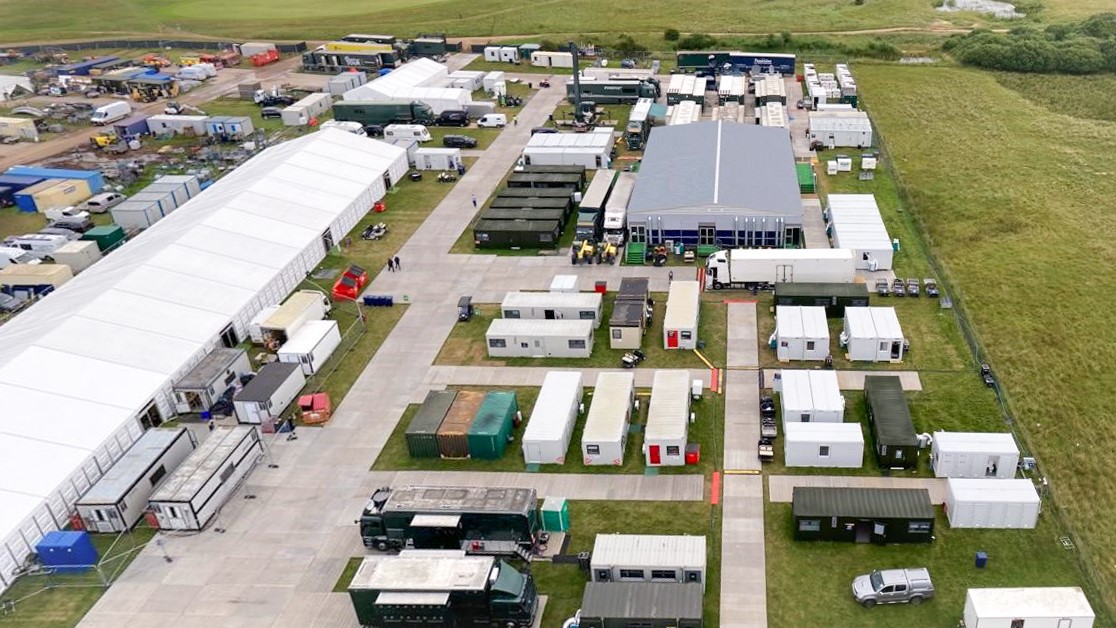 At the core of the production facilities is a broadcast centre that is home to just the world feed this year. The world feed is produced out of a main production gallery, a main sub mix area, and a super-iso/replay room. OSCAR (Outside Source Central Apparatus Room) and QC are the heart of the technical operation.

Next door to the super-iso/replay area is the main replay-sub mix area, where two directors and four EVS operators create features and additional replay packages via four EVS replay servers. The teams in both iso-relay areas work hard to ensure that all the storylines on the course are covered properly.

The third component in the broadcast centre, the main production gallery, features a Grass Valley Kayenne production switcher with 5M/E and 10 DPMs.The freed-up NBC space has been populated by MST with 6 Channels of GFX for World, plus 2 channels each for Marquee Groups 1 and 2 and 3 Hole UHD GDR coverage, plus a large onsite Top Tracer operation supplemented by a remote TT service from Sweden.

“CTV OB has more trucks on hand this year as OB 12 A and B, our new fully IP-based golf trucks, will be on hand alongside the other trucks and the production cabin,” says Greig. “That gives us a new triple and double expando that we didn’t have in previous years.”

Some of the production team will be working remotely, including ARL which handles augmented reality graphics out of New Zealand and TopTracer which will be operated out of Sweden.

“It’s still a major show with 12 different production streams,” says Greig. “And the course is a links course so it will be a challenge to get anywhere with all the people. And then on top of that, there are the different bubbles: the spectators coming in, our bubble, and then the players and officials’ bubble.”

“If you have had double vaccine then you don’t have to take the test every 48 hours,” says Greig. “That’s the only relaxing of protocols we have had.”

One of the challenges from a production standpoint is that the crew can find it challenging to get near the players.

“If you’re not in the player’s bubble you cannot be near them” he says.

There is also backup crew on call to give the team the flexibility to deal with someone testing positive.

Historically rights holders like the BBC, Sky Sports, NBC Sports, and TV Asahi have had a robust on-site presence but this year only the BBC is on site fully and working as they normally do.

“We have OB9 one of our triple expando scanners looking after NBC Sports and the Golf Channel elements as we have 16 outgoing lines to NBC in Stamford and five outgoing lines to ‘Live From’ for the Golf Channel,” he explains. “That is over and above the clean and dirty feeds, marquee groups, and three hole feeds. We have eight router panels remote from Stamford so they can access any of the 103 host cameras and associated audio.”

Multi-viewer feeds are also sent across the pond so that NBC can see every camera on every hole.

“NBC also has their own dedicated RF minis, some cabled cameras and a couple of ENG units,” he adds. “They don’t have any on-site commentary or studios, but they do have on-site reporters at the interview positions and on-course reporters.”

TV Asahi is completely remote this year and Greig says that “a flypack in a cabin will give the team in Japan access to all the cameras and programme feeds, which gives them a customized streamlined operation,” he explains.

Sky Sports is also remote with 60 feeds going back and forth between Sky in London and the compound. Helping in those efforts are 10 Gbps circuits and then the streaming and data control services have their own dedicated 1 Gbps circuit.

CTV and ETP teams will shift into high gear on Sunday night following the event. Next week there are three simultaneous golf events: the Women’s Evian Championship France; the Senior Open at Sunningdale Golf Club; and the European Tour Cazoo Open from Celtic Manor in Wales.

“It’s a triple golf week so it will be chaos on Sunday night, especially as we have the issue of going across international borders,” he adds.

“Four trucks will be off to France, and then the main golf fleet of 14 trucks will go to Celtic Manor. And then there are another six trucks off to do the Seniors Open. So, it’s just a very quiet week for all associated with the golf.”