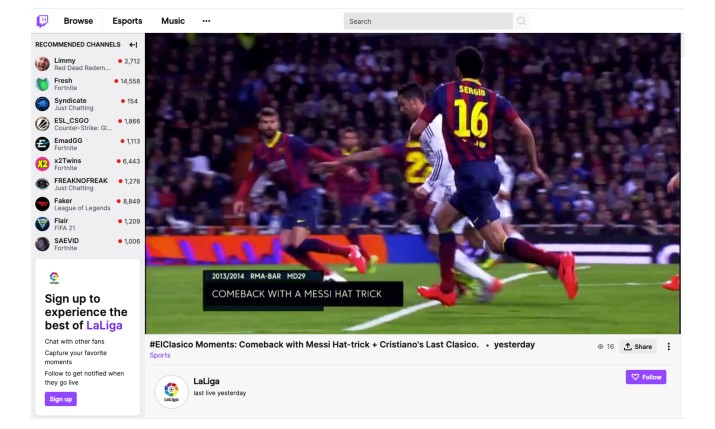 LaLiga has opened an official account on Twitch, becoming the first major European sports competition to join the global streaming service, and is planning to use it to share original programming and content.

Going live this week, LaLiga will use the account to launch a new weekly series of compilations, clips and special programmes featuring LaLiga players, LaLiga Ambassadors and LaLiga Icons.

It will also publish original shows produced by LaLiga North America, the league’s operation covering the USA, Canada and Mexico.

Content launching this week will focus on this weekend’s ElClásico between FC Barcelona and Real Madrid, including profiles, debates and the live warm-up from the world’s biggest sports fixture.

As it continues its partnership, LaLiga said that it will also work to develop new collaboration opportunities and experiences for the Twitch community on its network.

“Twitch is a service that allows us to reach a new type of audience and explore new content formats to reach our global fanbase.”

“As a global entertainment brand, LaLiga aims to offer the best product in the world,” explained Alfredo Bermejo, LaLiga’s director of digital strategy.

“The official LaLiga account on Twitch is an opportunity to take the next step in our content and social media strategy. Twitch is a service that allows us to reach a new type of audience and explore new content formats to reach our global fanbase.”

Among the scheduled programming for Twitch will be a series of shows produced by LaLiga North America’s new studio operation.

Anchor shows will be delivered in English and Spanish, hosted by recognised talent.

These will include the matchday review show ‘LaLiga Zone’, the quickfire ‘One minute with LaLiga’ and ‘LaLiga Previas’, focusing on the week’s upcoming action.

Other short- and long-form programming will also be created to provide further unique access and perspectives into the competition.

La Liga currently has a strong following on the Twitch service through its eLaLiga Santander eSports account where it has created various Twitch events in recent months, including the #eLaLigaAllStar tournament which was held with leading gamers to celebrate the return of the league’s official eSports competition, eLaLiga Santander.

Farhan Ahmed, strategic partnerships manager at Twitch said: “LaLiga’s approach to this collaboration, built around enhancing the fan experience through unique content, promises to be innovative, exciting and impactful. We can’t wait to see how the community of superfans interact and immerse themselves in this content.”