Over 30 broadcasters to show live coverage of 2019 Investec Derby

Live coverage of Saturday’s Investec Derby, from Epsom Downs Racecourse in the UK, will be shown by more than 30 broadcasters across the globe. Racecourse Media Group (RMG), the UK-based media rights organisation which produces and distributes top-class horseracing around the world, and Jockey Club Racecourses (JCR), owners of Epsom Downs Racecourse, have generated widespread interest in the £1,625,000 race. 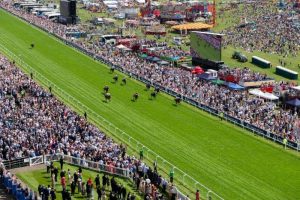 Stephen Wallis, The Jockey Club Group’s international director, said: “The 2019 Investec Derby has attracted a wide array of broadcasters, as befitting the greatest Flat race in the world. Major networks such as NBC, CBC, ESPN, ITV and SuperSport have been drawn to one of the world’s great sporting occasions, as have many other sports and racing channels. Wherever you are in the world, the chances are that you will be able to tune in to what should be another fantastic renewal of the Investec Derby.”

Viewers in the Asia Pacific region can watch live via the Green Channel (Japan) and TVB, Cable TV, Now TV and HKJC (Hong Kong), while Australasia is covered by Racing.com and Sky Thoroughbred Central (Australia), plus Trackside (New Zealand).

African broadcasters include Super Sport (sub-Saharan Africa) and Tellytrack (South Africa). Seventeen countries in the Middle East and North Africa region will be served by live coverage from Dubai Racing Channel (UAE), while Yas TV will be broadcasting a dedicated Derby programme in Abu Dhabi.

CNN is set to cover the race for its World Sport programme, which reaches over 378 million households, while Trans World Sport, the leading global sports magazine programme, will offer the fixture added exposure via its household reach of 326 million.

Coverage of the race will be widely available to news outlets across the world via SNTV, the leading sports news video agency, which delivers to 180 territories around the world.